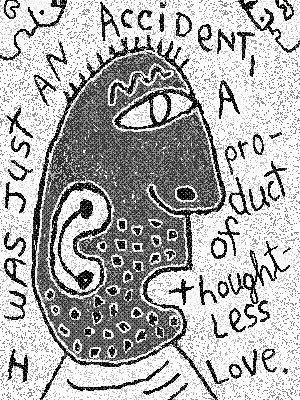 He said his kid was an accident. I thought smuggly that I'm glad that I was planned (or so I was led to believe).

Then I started to imagine a continuum from deliberate to accidental.

Imagine someone getting off a train because it breaks down. Then a cyclone comes (an unpredicted cyclone, of course) and drives a tube through his private parts (ouch!) into the vicinity of her fertile egg. And one hefty little critter fertilizes the egg. Will, that kid was truly an accident.

On the other extreme, imagine a DNA expert sorting through a bunch of critters, picking a very special one to fertilize an egg. Well, that's the other end of the continuum.

A product of a hot roll in the hay is not an accident any more than is a gun going off in a bank robbery. It is called "conditioned causality." The condition made it possible for something to occur, though other outcomes are possible (unlike cause and effect scenarios).
at May 10, 2008