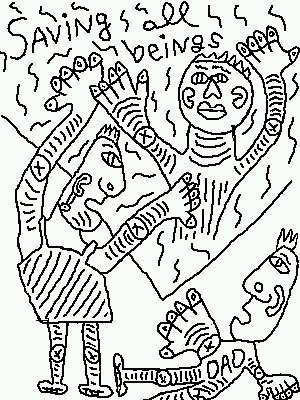 Dad
From our neighborhood elist: "The boy's father stood on the far edge of the pool and ordered the boy -- about four or five years old -- to walk around the pool and jump off the diving board. When he hit the water, the boy panicked, and he started flailing around, screaming and going under. My son [a conscientious lifeguard] dove in and rescued the hysterical boy and swam him to the side of the pool and helped him out. The father stood several yards away the whole time and never made a move to help or come over. In fact, he got mad at my son for interfering!"

I received this reaction from our neighborhood elist:

I don't get the picture, Kim. Is it making fun of the lifeguard for saving the kid? I am trying to figure out what you are trying to say here. Please enlighten us."

The Buddhist priest said that karma is relentless, meaning (to me) that good comes from good and bad from bad, always.

(Note: I was scolded for using the words "good" and "bad: Here is a quote from the Buddha that uses pain and happiness instead: "All that we are is the result of what we have thought. If a man speaks or acts with an evil thought, pain follows him. If a man speaks or acts with a pure thought, happiness follows him, like a shadow that never leaves him."

And another quote that speaks to the relentless nature of karma:
"All things appear and disappear because of the concurrence of causes and conditions. Nothing ever exists entirely alone; everything is in relation to everything else.")

I was struck with the ambiguity of the situation. A father with the greatest of intentions, trying to teach in the best way he could, and a lifeguard conscientiously doing his job. I felt some compassion for both (as well as for the kid).

And stepping back, I saw some humor in the situation—both the lifeguard and the father were invested in "saving all beings" and yet were in conflict with one another. William Saroyan would have described this as "the human comedy."
at June 09, 2009

The dad said, "What doesn't kill you, makes me look like a fool!"

You didn't bother to point out that the young man who made the rescue was a lifeguard and had no choice but to interfere or risk losing his job.

GOOD COMES FROM GOOD AND BAD FROM BAD is of course in and of itself nonsense.
Who can say what is good and what is bad and when does it "come" - in our small notions of universe (our body and those around us in the next 3 days?) we think we know. ACTIONS CREATE REACTIONS/RESPONSES/KARMIC RESIDUE. YOU CAN NEVER UNTANGLE ALL THE THREADS. YOU DO THE BEST YOU CAN AS YOU SEE IT IN EACH SITUATION AND THEN MOVE ON. CUT THROUGH.
Gassho, Barbara