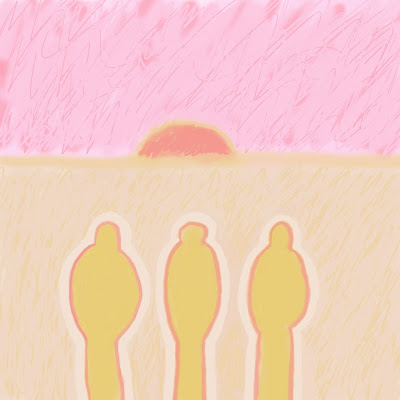 Friday morning: My cousin wrote yesterday about Treme, an HBO dramatization of Katrina's impact on the Treme neighborhood. I watched the trailer and requested it on Netflix, so someday I'll  see it.

Not only was Katrina a terrible tragedy, but the recent oil spill has added "insult onto injury."

That said (and felt), I started to think about the elephant in the room. We are all on death row. (You probably didn't want to hear that.) Today our circumstances maybe be a lot better than Treme. But we are essentially in the same boat (some may crucify me for saying that). We are prone to sickness, heartbreak, and death. Prone is a euphemism. All our attachments will depart someday. Even the Earth, as we know it, will go away. And yet we smile. And yet we feel compassion for those less fortunate.

In the 80s, I met a few who were struck with AIDS. They knew they were on death row, and they could predict when their execution would occur. Yet they had an air of contentment that I had never seen before. In spite of (or because of) their certain demise (medicine is prolonging that now), they were able to have a certain strength to enjoy each moment for what it was. No more pretending about the elephant.

Later Friday: All was going well in my life, though my cough comes and goes (mostly comes, or at least, so it seems right now). In any case, a terrible tragedy occurred today to a different cousin and we all mourn for him. The elephant sometimes appears at the least predictable times or places. I dedicate this drawing to my cousin.

My son and I visited him last fall, and shared with him a bottle of wine watching the Oregon sunset. He loved the ocean as he did telling a good story. We shall miss him.
at June 14, 2010

Hi Kim, Today I watched Toxic Towns USA about Mossville Louisiana and the problems the town is facing with catastrophic illness and the chemical plants there. It made me sad. I think I saw the special about Katrina not too long ago. It feels like the White Elephant is these people who cannot afford to get out of the mess the big corporations and government are ignoring. (At least it appears to be that way.)

Being sick has definitely changed my life. Knowing I have a second chance to live life with many changes, and for this I am greatful. I don't enjoy the illness, but I welcome and embrace how I perceive the world and others.

I am glad you have the memories of your family.

So sorry to hear about your cousin's passing. Sincere sympathies to you. Yes, the elephant is in the room - for all of us. We all live like a man being pursued by a tiger. Some fall over the edge of a cliff and grab to a vine that is our only protection from the gaping abyss. The fortunate are able to enjoy the strawberries that grow alongside the vine. Here's to strawberries and lives without coughs.

I'm glad you got to visit with your cousin last fall before he met with tragedy, and I hope the memories of the visit and the stories you shared can provide some comfort as you mourn his loss.

A beautiful drawing. I look forward to visiting Art's ocean.

Big head, little body. Continuing the theme of the relationship of inside/outside with the inside escaping to the outside. Or is it visa ver... 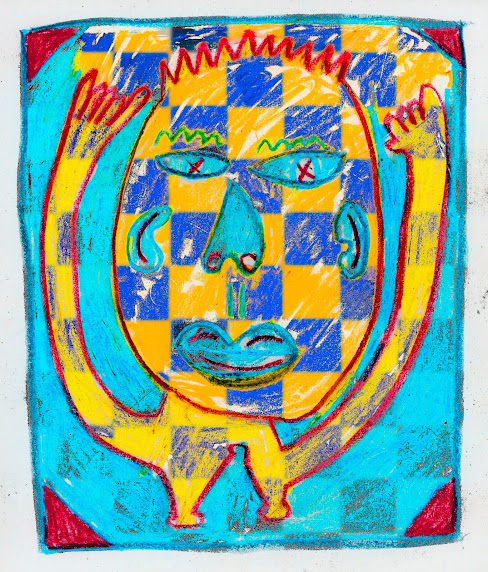