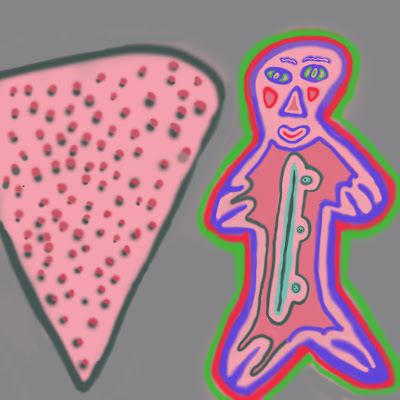 Plume and Man
A rain storm woke me up at 5 am. I started to anticipate Kate's response to yesterday's blog. "Ok," she might say, "I am responsible... but, it is nothing compared to the intentional carelessness of BP."

I learned about continuums a while ago. Sometimes they describe behavior much better than "this or that." So on one end of the continuum of causality we have the butterfly flipping its wings on the other side of Earth, and  on the other end we have a BP executive saying, "go ahead and drill. I'm the boss and I don't care if it is risky."

Then I started wondering what actually has more effect on our lives, intended or unintended actions. It is very clear that when someone flies a plane into a building that is an intentional action that has profound effect on many peoples' lives. And, on the other hand, when a hurricane hits a village (assuming that is not the intentional act of the gods), that also has profound effects. I wonder if we could add up all the effects which were intentional and which were not, would we discover which is the major "effector." (Later, at dinner with my wife, as we talked I looked out the window at a luscious BMW convertible, and tried to decide if it was the product of greed or heart. So I asked her and she said, "why can't it be both." Why had I forgotten about the continuum from this am?)

As I woke up I saw in my mind a set of photographs in National Geographic that was made many years ago. The article was about construction workers in Mexico. It showed two photographs. In one, about 50 workers were eating lunch sitting on a log about 3 or 4 feet in diameter and 50 feet in length. In the second, they had left, but all the wrappings from the lunch were left on the log. I assumed that the workers had no place to put their garbage, so leaving it on the log was as good as putting it somewhere else. They weren't bad people littering the Earth. They (at least in their minds) did what seemed like the only thing to do... leave their garbage on the log.

The oil was created by the Earth over millions of years. There was never any evil intent on the part of the Earth in producing the oil, though BP is said to have been careless in releasing it from the ground. We criticize BP because they had a choice (to be reckless or careful). We have the continuum of the Earth at one end producing oil without an intention to aid or harm, to, at the other end, BP handling the "dynamite" recklessly and producing an explosion. Maybe BP isn't quite where the 911 terrorists are in terms of intent, but certainly the effect of their actions might be as much a disaster.

P.S. In support of my recovery we went to dinner at Mother's, one of our favorite restaurants in Austin. I turned off my cell phone and missed a call from someone asking if they left a tube of toothpaste in my car.
at June 09, 2010

Your questions are so provocative that they freeze me into inaction. I cannot make moral judgments for fear I may be overlooking some crucial aspect of the equasion. H.

I think we can still act without moral judgements... can't we?