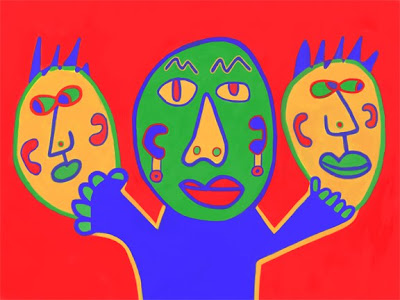 Do we choose vendors (restaurants, barbers, mechanics) because they are moral, or because they do a good job? Do we really care that their mission is to make money (and the more the merrier)? Could the world function without any "morality" or "compassion"?
at August 05, 2010

Concepts like capitalism and communism cannot be moral or immoral. These are just words created to describe certain sets of ideas.

I have been taught that to be immoral, one has to knowingly and deliberately create offence. A concept cannot do this. Humans can do this.

I do not find anything really offensive about your two plumber examples. If the second plumber does crappy work because he wants to piss off the customer or charge them for a 2nd visit. . . immoral. If he has just never really mastered his trade. . . it’s an ignorance issue, not a moral one.

One must knowing and purposely f@*k someone over for personal gain to become immoral.

Do we choose vendors (restaurants, barbers, mechanics) because they are moral, or because they do a good job? --- Mr. Kim

There are certain goods I will not buy and certain vendors I will not patron because I feel the f@*k-people-over factor is too high for me.

Do we really care that their mission is to make money (and the more the merrier)? --- Mr. Kim

Earning a living is one thing. Bleeding others dry for a higher profit is another.

Could the world function without any "morality" or "compassion"? --- Mr. Kim

Probably, but I think it would be a crappier existence.

Kate: One must knowing and purposely f@*k someone over for personal gain to become immoral.

I'm not sure if "for personal gain" is necessary to be immoral. Was Hitler acting for personal gain? Imagine that he was just fulfilling his concept of what was best for his country. Can one do that and still be immoral?

Kim and Kate challenge the reader to rethink morality. Both advocate with considerable skill. H.

I think so. What he personally stood to gain was a new country where all the undesirables were gone and he was the ultimate leader and people did everything he said. That is personal gain to an extreme. He may have told others or himself another story, but delusion doesn’t negate positive gains he’s receiving.

And I’m sure he knew he was killing lots of people so that he could make his perfect world. He was ok with that. He knowingly and deliberately f@*ked people over for personal gain.

Hitler wrote, "What we must fight for is the security of the existence and reproduction of our race and our people, the sustenance of our children and the maintenance of the purity of our blood . . . so that our people may mature for the fulfillment of the mission allotted them by the Creator of the universe." It is actually because we (hopefully) disagree with the details that we call him immoral.

I don’t quite understand what you wish to express here. . . That ‘morality’ is a judgment call and/or equates ‘disagrees with’? I guess. . . but does it change anything?

If someone is abusing you, that person is very unlikely to call it abuse. He/she might say that he/she is helping you or doing this for your own good or doing it because he/she loves you (or because he/she wants to pass the savings on to you the consumer) . . . Does it mean it’s not abuse because he/she says these things? If you want the abuse to stop, you have to call it for what it is first. Yes, it’s a judgment call. So what?

You asked earlier if we choose vendors because they are moral or because they do a good job? (As if an immoral vendor can do a ‘good’ job.) I wrote that I didn’t patron certain vendors because their ‘immoral’ factor seemed too high for me. It doesn’t bother me that I am making a judgment call about the moral standard of certain business practices.

I sort of feel like you struggle with whether or not you have the right to make these kinds of judgment calls. I feel like one would be a fool not to make these judgments. Why exactly does it matter that it is our own judgment that deems Hitler immoral?

My father (had 2 law degrees and was loved by everyone) once said that there is no such thing as morality, only law. It didn't seem right at the time, but now I don't know. I started thinking that tobacco companies are evil because they kill people... but how about car companies, who also kill people... or churches that take money from the poor promising them a good afterlife... or... or... ????? Who does that leave? Noone?

We’re all sinners for sure. Some of us still just sin a bit more than others.

“Let me ask you something.”

“You ever not buy stuff or not patron someplace for moral reasons?”

“Ok. Yeah. I think that’s a good example. George’s place. So what exactly did George do that seems immoral to you?”

“Oh God! Those long-ass hair plugs!” Both women laugh. “Those were so nasty and he kept flipping that fake hair around like it was sexy. What a joke.”

“He’d make sure to brush that shit whenever some woman walked in. Man, he was proud of that mess.” The two laughed again. “But seriously, hair extensions ain’t exactly immoral. What exactly did George do that you think was immoral?”

“Are you kidding me? You already know this. Just pick something.”

“I know what I know. I want to hear what you know.”

The woman sits quit thinking about the question. “Ok. I got it. The most immoral thing I know about George. Do you remember that night he was bragging about how he was using his wife’s police badge and pulling people over? I believe that wacko is crazy enough to actually do something like that. That is some messed-up stuff. And can you imagine being the person getting pulled over by George?” The woman shakes her head back and forth. “He’s out there making future cop-killers.” The two women sit in silence for a little while.

“You know though, we both kept going up there for a little while after that.”

“Well yeah. But that’s because it was like watching a train wreck. No matter how ridiculous it got, you couldn’t look away. You had to know what was going to happen next.”

“Why exactly did you stop going there? What actual thing made you realize you didn’t want to be there anymore?”

“I was in love with Dan. When he quit, I was just mad. Stupid George driving the good men away. What about you? Why’d you stop going up there?”

“Freak started wearing his damn gun in his waist band like he was some wild-west gansta. I can deal with crazy, but crazy with a gun is dangerous.”