I wanted to return a modem for a sick friend to Time-Warner. I did an online chat with them and the woman told me that they could pick it up from me, considering the circumstances... but that I'd have to call to arrange that.

I called the number they gave me... and they said they'd send a box. The only problem was that they would only send the box to his old address (not to me), so that wouldn't help. I kept saying "why would you want to send a box to an address where he used to live." And then, I spoke to a supervisor, and then I spoke to his supervisor. All three said that it is policy to send boxes to old addresses, not new ones. I asked if they were human beings and if they realized how absurd was this policy. I lost it. I leaked (Buddhist term).

Finally I gave up and drove the box to their office. The woman there was very very nice, and the modem is returned and I have a receipt. And I found at their office this poster advertising my next match. 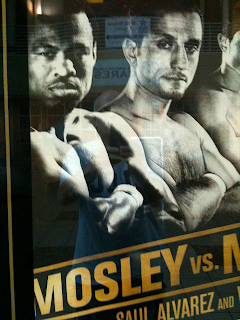 
My four year old grandson called me when I got home. I told him the story. Without asking for his opinion, he simply said, "why don't you use an old box?"
at September 16, 2010