Is "action" the miles to go that Robert Frost spoke of? 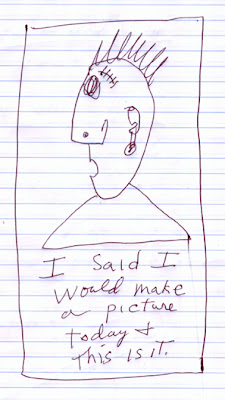 Robert Frost wrote, "But I have promises to keep, And miles to go before I sleep, And miles to go before I sleep." Until Melanie mentioned "action" in her comment on my last post, I didn't really consider that important part of the equation. Could it be that the "miles" that Robert Frost spoke of were the work that went with the promises? I had always thought of promises and miles as unrelated. But maybe not.

Today we took out a shelf in the closet to replace it with another shelf. Then I had to do drywall repair. I missed working with my hands. Haven't done that for awhile. It felt good!

Started counting my breaths again while meditating. Some people recommend this for people just starting to meditate. Others do it their whole lives. The challenge is not to create a self who counts the bodies' breaths, but rather to integrate the counter and the breather.

Some are saying that if we tax more we'll be able to pay off the deficit. I read about a couple of studies on this showing that the government spends somewhere between $1.29 and $1.58 for every dollar they tax. Reminds me of the students who drop out of school to earn money to go back to school. They end up in debt.

Today I finally rang the bells at the right time during a Japanese chant. It was partly because we chanted slow enough that I could find my place. Now the challenge is not just to make noise, but to make music. And not just with bells, but with the rest of life too... even with the clerk at the grocery who thought I should play the lottery because my groceries came out to be exactly $20 (she thought that was a good omen). She said that she wanted to win the lottery. I told her that it has been the kiss of death for many. She said that she would disconnect her phone. I said "good luck."

"...a couple of studies on this showing that the government spends somewhere between $1.29 and $1.58 for every dollar they tax." Not during the Clinton years, we reduced the deficit considerably. Unfortunately we elected George W. Bush as president. H.

I'm curious about how people choose to take an action, life being a series of actions or non-actions-- with moments of just being, perhaps. How has meditating affected your actions? Do you make "better" choices? What moves you to act? Regarding the deficit: Yikes! How fast things change! There is alarming news about the effects of the deficit that will be coming our way, but how do we, and how will future "we-s", experience it while living action by action? In the future I may very well be kvetching with friends: "Damn! I could have retired earlier but they raised the retirement age to cover the d-f'ing-eficit that paid for wars and Wall Street gazillionaires who feel no remorse for ripping people off!"

Oh! Well! I just found this quotation at the bottom of the page of the Dalai Grandma's blog:

"My actions are my only true belongings. I cannot escape the consequences of my actions. My actions are the ground upon which I stand."
[tr. Thich Nhat Hanh]

From what I understand, Dogen said time is being, so it seems to me you could also say action or inaction is time is being. There is no time like the present to act!

I don't see things for me as action/non-action. It seems logical enough, just not my bag of tea. I'm more about thoughts than action. Maybe it is my mother's fault—she made my dad take out the garbage because she said that I needed to study.

As to "alarming news," I think it is overrated. Maybe it is the sitting, but we seem to have an economic downturn every 8 years, and we'll recover from this one like we did the others. I realize that there are lots of jobless people, and people who can't get loans. But at the same time we have a stock market that is up 250 points today.

This reminds me of the priest who was accused of fathering a child. His response, "is that so." Then, after years of being ostracized, the real father came forward. When they told the priest that he wasn't the father, he said "is that so." That is the effect of meditation. Alarms are not very loud. In fact, I was told a couple of days ago to ring the bells softly.

Maybe retirement is more like being than acting. In my last job, I needed to act every 5 minutes.