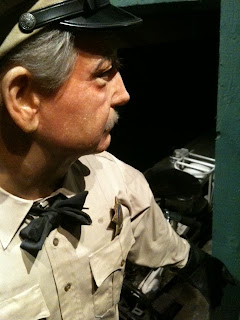 Here is a photo of a modeling of a 1932 Highway Patrol officer. I'm not sure what he has to do with this post, but cops and violence seem to be partners (cops "fight" violence).

Years ago I had a discussion with a relative about Social Security. I tried to make the point that it is a ripoff. Far more money should come to retirees given what they contribute. My evidence is my state of Missouri retirement pension, where essentially the same donation renders many times the benefits. My relative's point was that because Social Security was not designed as a pension program, and it should not be compared to one. What was interesting to me is that when I shared his comments with a friend he was quite upset, saying that if he had known that this was a public forum he would have become far angrier in his comments.

Jump to earlier today when a neighbor is outraged about Democrats' expenditures. I'm sure that there is some truth to his conjectures. But I'm curious about the outrage and anger. What is that about? Why do we need that? We complain that some in the Middle East are so intolerant, and yet we may be modeling the same behavior. No wonder wars prevail. We can't respect the "other side."
at December 31, 2010

Coworker 2 took cookies to work to share just before the holidays. Three coworkers munch cookies in an office and one coworkers begins to talk about the problem of big government.

Coworker 1: “Did you her about how those assholes in Washington are trying to regulate school bake sales now. They say it is to fight childhood obesity. I mean those asses just screw everything up. They’re regulating our lives away!” Then she stormes out of the office with her cookie.

Coworker 2: “It’s like a talent of hers. Like that three degrees of Kevin Bacon game. Everything goes back to the asshole government and evil Obama.”

Coworker 3: “I find that argument actually hysterical coming from the person who limits the entire office to one pot of coffee a day.”

Coworker 2 laughs: “Yeah, she is good at making sure you guys drink just that one pot.”

Coworker 3: “That nonsense pisses me off.”

Coworker 3: “I didn’t realize bake sales were a huge issue in this country. I don’t ever remember having bake sales at school as a kid.”


Days later, after the holidays, a box of chocolates has been placed on a file cabinet. This is an understood share zone.

Coworker 3: “Only if you renounce the embargo you have placed on our coffee.”

Coworker 1: “Do you have any idea how much that coffee costs?”

Coworker 3: “It is an investment. It is statistically proven that the higher levels of caffeine in our bodies make us more productive.”

Coworker 1: “Whatever.” She grabs a chocolate and leaves the room.


Not all that long ago, coworker 4, the new guy, makes a second pot of coffee. Ten minutes later . . .

Coworker 1 to Coworker 3: “Did you make this coffee?”

Coworker 1: “Well you better drink up.” She holds the pot in the air swirling the dark contents of the pot. “I’m going to be really mad if I have to dump any of this down the drain.” She says all this while maintaining an eerie false smile. Then she turns and leaves the room.

Coworker 2: “Good job. Are you trying to start a war?

Coworker 3: “Oh the war is on! Coffee Nazi is going down!”