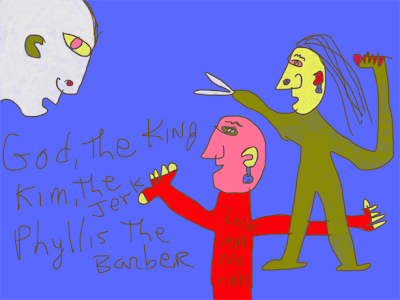 My last post had a comment, "You're a jerk." Imagine the freedom that assessment might give someone to know that they are a jerk, and, better yet, to learn that the secret is out. No more pretending. Yes, I'm a jerk. How else can I explain my countless episodes of jerky behavior?

On the other side of the coin, we are all buddhas, whatever that might mean. We just need to awaken to who we really are, which in my case is a jerk (I guess).

I had two interesting interactions yesterday.

I went to a doctor's office and started to sign in. But no sooner had I put the date down, the nurse called me. So I put the pen down and went over to her desk. Another nurse came by, and kept looking at me and at the sign-in list. Finally she said, "you didn't sign in." I looked at the sheet and then told her that as soon as I was called I dropped the pen and came. "Did you learn that from your mother... to always do as you are told?" "No," I went, "my mother would turn in her grave if she knew I was so obedient. But then again, she's not in a grave, she's in the ocean... that is, most of her. The rest we are going to put in the ocean with my dad's ashes two days after Christmas." "Why the ocean?" she said. "Well, they loved the ocean. They'd walk by it every day."

Then I went to get a haircut with my barber, Phyllis. The young kid before me didn't have enough money to pay for his haircut. He was two bucks short. Phyllis told him to go and get some money from an ATM. He wanted to give her what he had now, but she said no, she'll wait for the whole amount.

As my haircut proceeded, I noted that the young kid had not returned. I asked Phyllis if she always gets paid in these cases. "No," she said, "a couple of times I probably didn't." And then she added that sometimes she just forgets. She said that the man upstairs takes care of the people who don't pay.

I looked at the ceiling and wondered if there was a second story I didn't know about. Then I realized what she was saying... that God makes everything just in the end.

So I asked her, "what if the young kid met a starving man and gave the money to him. Would that be OK?" "NO," she answered, "that would not be right! But then, God would take care of him if he did that."

So a month ago I was told by the Jesuit priest and Buddhist teacher Robert Kennedy that "God does not interfere" and now by Phyllis the barber that "God makes things right." Is it possible that both are true?

P.S. As I was leaving Phyllis the young man returned with the money. God is off the hook. Or maybe not. I forgot to ask the young man if he had found any starving men to give the money.
at December 13, 2010

Your tales are engrossing and they reverberate in my head. H.