Less Taxes for the Rich: a Jerk's Perspective

A lot seems to be missing in most of the discussions I read about "cutting or increasing" taxes for the rich.

We have decided as a society that the rich should pay more taxes. We have a progressive tax system, where the more one makes the higher percentage of their income goes to Uncle Sam... and thereby increasing the amount twice (once because it is a percentage of a larger sum, and once because the percentage itself is higher). The rich pay plenty. Could they "afford" more? Probably. Should they pay more?

In reality, the rich have many tax breaks, like being able to inherit assets without paying for the assets' appreciation. 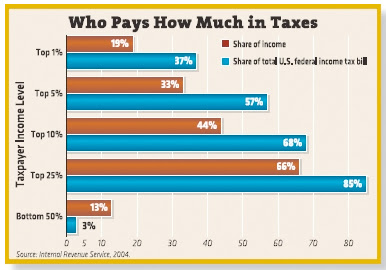 And even with these breaks, 85% of the taxes are paid by the top 25% of the population. As the kids say, "is that fair?" And as you see in the graph above, the "rich" are paying a higher percentage of their income as well. Some say they are being taxed to death.
at December 18, 2010

I don't mind paying taxes as long as said taxes go toward things I deem worthy.

A lot of tax money gets spent on things I do not feel aid in the positive development of the world.

I am going to fight less for the rich guy than I am for my tax bracket. Rich guy has to fight his own battle. Plus I have less guilt about throwing rich guy under the bus than I do throwing poor under the bus.

It may be a rich gal. I heard something about more women being employed right now in the USA than men. But probably the guys earn more.

Are you suggesting that poor people are better than rich people in having less guilt throwing the rich under the bus?

I heard something about more women being employed right now in the USA than men. But probably the guys earn more. --- Mr. Kim

I sort of take that to mean that many women are trying to hold families together after their husbands who provided the bulk of the combined income lost their jobs. The statement has nothing to do with moving womanhood forward or what. . .

Are you suggesting that poor people are better than rich people in having less guilt throwing the rich under the bus? --- Mr. Kim

Let’s say I have two brothers (I really do, but these are hypothetical brothers). One brother drives a Mercedes. His wife drives a BMW. They live in a huge house, participate in all the latest technologies, and travel that world for vacation. Then the other brother lives in the crappy part of town in a studio apartment. His entertainment dollar is spent on cable TV and I had to ‘lend’ him $20 for gas last Thursday so he could get back and forth to his crappy job.

Our parent dies and we have to cover the cost of the funeral. In an ideal would, we would all pay a third. I can in fact afford my third. . . maybe a little more. We ain’t getting a third from our ramen-noodle eating brother. It ain’t going to happen. I can’t afford a half. That ain’t going to happen. The world traveler brother is going to have to cover about 2/3 the cost of the funeral (or we go against our dead parent’s wishes). He’s the one with the money. He will bitch and moan about it. And yes it isn’t exactly fair. But I don’t really have a lot of guilt about it. The man with the most will weather this hardship much easier even if he pays more. If we made our poor brother pay the third. . . I would feel bad about that because I know it would cause him more suffering than 2/3 a share would cause my rich brother.

At some point, this equation falls apart and rich brother will have taken on too much and I will feel bad. But it’s all kind of hypothetical when we talk about it so I don’t really know where that point is yet.

When I hear people say they are going to tax the rich . . . I don’t initially perceive injustice. . . That’s what should be happening. And this is why I’m not going to fight the rich man’s battle.

If rich man wants to get to non-rich man (or woman) to understand that he is being ‘taxed to death’, I think it would be smarter to appeal to how tax money is being spent poorly and/or needlessly. . . and that’s why it is unfair to tax rich man to this degree.

I want my brother to pay for the funeral, but I don’t expect him to honor my poor-brother’s request for a new post funeral wardrobe.

Does taxing the rich more help the economy? That's the question. What are the rich likely to do with money that isn't taxed. Either spend it or invest it. Either way, it gets dispersed for the general good. So... some say that overtaxing the rich causes them to invest less in businesses (theirs or others), which hurts the economy.

Either spend it or invest it. Either way, it gets dispersed for the general good. --- Mr. Kim

I am not sure I agree with this assumption.

So... some say that overtaxing the rich causes them to invest less in businesses (theirs or others), which hurts the economy. --- Mr. Kim

I guess it depends on the business person. By and large though, I’m not going down that road. I don’t think that this is true for the most part.

Not all that long ago, there was this huge man-made disaster in the gulf that involved this company called BP. After listening to a bunch of for-show congressional hearings and watching new reports and digging into the companies history for my own amusement, I view BP as a company that made cutbacks in safety procedures and maintenance of existing equipment in order to increase the profit margin. They didn’t choose to not invest in equipment or safety because they were taxed so heavily. I do not believe that if all CEOs or other influential leaders in the BP company had been taxed less that things would have turned out differently. I think they would have made the same decisions for much the same reasons. And the idea that they may have bought a new car or what with their tax money does not mean that they would have made this huge improvement to the economy. It just seems a bit absurd to me when I think of it in this way.

Does taxing the rich more help the economy? --- Mr. Kim

David McCandless did a TED talk about data visualization. In this talk, he prices the military action (I’m calling it that because I don’t know what the media is calling it this week) in the Middle East at 300 billion dollars. It is the US’s largest expenditure by far. I think it might be fair to say that if you start to more heavily tax wealthy people in order to maintain this military action, wealthy people will start to get a bit pissed about it. I think the more wealthy people start to get mad (and I think it’s full ok to get mad), the more likely a forced significant change in this arena will occur. So. . . maybe taxing the rich will help ‘the economy’. And if this is the reason rich man wants to fight a battle, I will side with rich man and demand an end to his over taxation.

If rich man is bitching about how the school lunch program is breaking him. . . To hell with rich man. . . Tax him until he hurts.

Your opinions, Kate, are probably just as good as any. Any absolute statement about A causing B is shaky at best. Sometimes things go one way and somethings the other way.

But, though I though the volunteer army was a great idea, we'd be a lot less likely to be at war if the senators and representatives had kids who were drafted. There would be an uprising among college kids like you wouldn't believe. I wonder if women would be drafted if we had a draft.

I wrote this back in 2009 in response to Obama’s September 9, 2008 speech in which he proposed a $4000 tax credit to middle class students ‘willing to serve their community or their country’.

I am not against our soldiers receiving a due compensation for their service to our county. What concerns me is that while there is no draft, funding for higher education does not seem as readily available as it was a number of years ago. And as Mr. Obama points out, “When 2/3 of all new jobs require higher education or advanced training knowledge is the most valuable skill you can sell.” In a big way survival in the US means getting an education so you can get a job. When the cost of education is so high that most Americans cannot afford it and the government funding to get this education is not there, there is far more incentive for our young people to join the military. There is no need for a draft. There is a system set up to make our young people feel as if they have made this decision to join the military on their own. . . because they need money for school.

There would be an uprising among college kids like you wouldn't believe. --- Mr. Kim

Which begs the question of why aren’t they in an uproar now.

I watched PBS Newshour just before the last elections. Gwen Ifill was interviewing two politicians (one democrat and one republican, but I don’t remember who exactly). She asked each of them to prioritize five important issues. And while I don’t remember exactly what the five issues were, none of them were Iraq or Afghanistan. Don’t-ask-don’t-tell was one of the issue. . . but neither war was. How weird is that? I think part of the reason people are not in an uproar is because our media is not throwing the reality of what is going on in our face . . . like they threw that Koran burning preacher from Florida in our face. So we are not reminded as much about the wars as we are reminded about balloon boy.

This person responded to this idea on facebook. . . “No, they dont bicker about health care and bank bail-outs so they dont have to think about war. They argue about these things, because those things affect them everyday. These wars really arent wars,t hey are police actions, really. And ...no one has had to sacrifice for these "wars" like they did during WW2.”

So . . . what does this reply say about the state of thinking among some . . . Because I have not suffered as much as my grandparents, I shouldn’t complain about war. Things like bank bail-outs and health care affect us, but war does not. And the war is not that big of a deal.

I think we are ‘sacrificing’. We just don’t say it is because of the war. We call it ‘a downturn in the economy’.

Seriously though. . . my little nephew doesn’t even remember the US not at war.