Why Dentist Kill Themselves 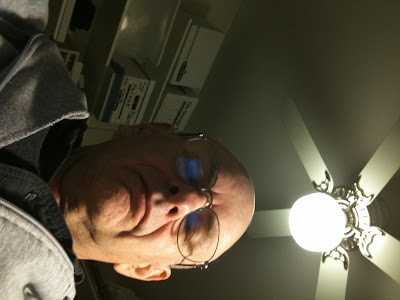 So I've grown up (or at least tried) thinking that dentists regularly do themselves in. It is not true that they do it any more than anyone else. At least, no one has proved it. I think it is interesting that there are more suicides than murders. As a race (Human Race), we protect ourselves against murder, yet do we protect ourselves against suicide with the same passion? I saw a book tonight on the shelves at Goodwill... something like "One Minute for You." That should help someone gain or regain some sanity.

I had my hair cut today. There isn't very much, but it still feels good to have less. I was going to LA last haircut, so I had told Phyllis, my barber, that I was going to hold her responsible if I didn't get a lead role in a film. When I came today, she asked how I did and I said, "almost."

Today I asked her if she could give me a bad haircut. She was talking about how sometimes she gives bad haircuts, or at least the customers are dissatisfied. So I said I wanted a really bad cut. She said she wouldn't do that. I offered first $100, and then $1000... but she said that money isn't the issue, and that she doesn't do hair for the money anyway, but rather just to buy the necessities. But no way would she give me a bad haircut. I suggested that maybe I should go to someone who had never cut hair.

Then at dinner I asked my wife (a good potter) if she could make a pot like someone who had never made one. She said she couldn't. And then she said that if she was drunk and had one hand tied behind her back she might be able to do it.

Isn't it something that we work so hard to be good, and we lose our ability to be bad? Who can really make a child's drawing but a child. Though Jack Benny could sure play the violin like someone who couldn't. Anyone know anything about that?

One more thought. I've been thinking about how "Zen masters" are pretty regular people. They have the same anxieties and insecurities. Why? Doesn't their spiritual practice work? When I ask them (I guess I'm not shy) they always give the same answer... you should have seen me before. I'm looking for a spiritual practice that transforms all its practitioners. And instantly. Any recommendations?
at January 14, 2011

How many people we know remember Jack Benny. I can see him clearly in my mind with that guileless grin, sawing away at his violin. We hear so many musicians today that play so well...no sour notes...no offkey sounds. We think that is the norm. Its really rare!

I think that if you are a master of Zen, it doesn't mean you can cook or do brain surgery...or even get along very well with others, though I would think that you would wish that you could. But you can sit, and you understand sitting pretty well. Hmmmm?