Johnny Rose texted me telling me he was safe from the tornado that went through St. Louis. Look at his website. He's quite a colorful character. Anyway, I didn't recognize his phone number so I texted back "who r u?" He texted, "Johnny Rose. How are you, really?" I responded that I'd answer him on my blog.

Today I heard about Roz Savage, a banker who gave it all up to row across the Atlantic. We work hard to build a fort to die in. Then some of us realize that we want to live rather than die. My wife and I had built a pretty sweet place in St. Louis. We thought we'd be there forever. And then we decided to move. Actually she decided, and I went along for the ride... and I'm glad I did.

In the 60s my friend Peter said, "why don't you become Kim the photographer?" He was responding to my interest in everything even though my first love was photography. Peter became a great landscape architect in Nova Scotia, and his wife, a fellow sculpture student of mine, became a doctor. What happened to me?

I took a workshop this weekend with Marc Lesser. Toward the end of the workshop, we had a journaling exercise. He asked us to write about how, if everything went as we wanted it to, what would our life look like in the next three years?

I never liked assignments. My first instinct is that I'm not going to do it. So I intended to do something else.

(I'm annotating, adding and changing this as I copy it from a scrap of notepaper.)

Maybe I don't want to go down the path I'm walking. I like the thoughts and the friends, but I miss being 100% immersed in art. (And now I'm watching a movie with the ocean in it, and think, wow... that's what I want... the ocean. Wow! Glad that movie is over. Now I can focus on this.)

Going at things as I've been doing, I hope to accomplish in three years a few simple things: controlling my eating, my addiction to email, taking regular walks with my wife, and seeing my daughter and her husband in a home that suits them. I hope to continue and improve my writing, and to increase my readers as well. But what about pictures.

Something is lonely about making art. Well, not lonely, but I did write that. It is all about "I" and as I wrote to my cousin today, I'm getting over "I" after nursing him for 64 years. We've had a falling out, of sorts.

First I used a camera as a way of not being in the middle of things, and then painting. All I wanted was to be in life, rather than talking about life. I no longer want to do the art that I programmed myself to do. It isn't cute anymore (I think my mother used to say that about my infantile behavior (when it would occur)). The imagery I brought from STL is dead for me right now. It is wallowing in self. It says "I am me" and I'm bored with that after 50 years.

I'm imagining imaging the cosmos, like Eric's painting that we have on our fireplace.

And all this came from the path I've been walking.

And now, just when you think you (and I) know how I'm doing, I have to print two more pictures that I'm doing for an exhibit that needs to go out tomorrow.

There are many threads weaving our clothes. This was one.

Thanks Kim Got more than I bargained for in your answer! I, too, am at a similar place of reflection in my life.

I have been in St Louis for 31 years, "playing" Johnny Rose. It has been a tremendous gift. But it's time to choose another role to play! Am not sure what that will look like, but I thinly it means not working so hard.

I am grateful for your friendship and mentoring! By being yourself Kim, you touch so many individuals on a deep level, helping them to discover themselves.

Something is lonely about making art. Well, not lonely, but I did write that. It is all about "I" --- Mr. Kim

Ironically in some philosophies or mythologies (Confucianism, Taoism), the path to understanding ‘true self’ or becoming ‘selfless’ is through creativity and art.

Good point Kate. Thanks for reminding me. Please do that occasionally. In Zen and the Way of Archery the author says that he was told that the only way of learning (not a good word here) Zen... oh, practicing... is through a Zen art. 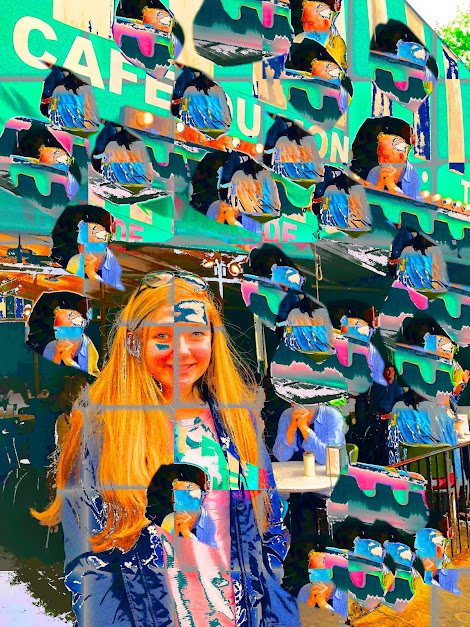