Naked or Nude or ?

Last night at the Off Center Theater in Austin, George Krause showed his sfumato (to smoke, no outlines) life-sized photos of people without clothes.

Soon after I arrived at the exhibition, a woman started to undress. I thought that someone was inspired by the photographs and decided that they would make a statement as well. Before I knew it, 10 or 15 people were all naked, wandering around the pictures that hung diagonally from a grid on the theater's stage. So we had three groups of people. The ethereal ones, radiating light in the photos. Their counterparts (and some of the models in the photos), moving around the gallery as if clothes (and shame) had never been invented, and then there was me, and you, and the others, still clinging to, and hiding behind, our clothes. 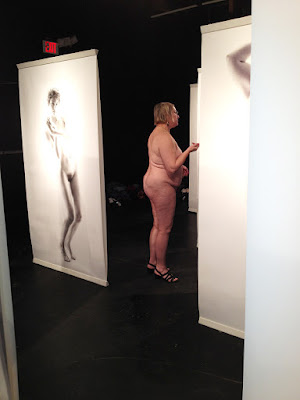 Somewhat reminiscent of Richard Avedon's pictures of the American West, he photographed these people as they were, so it seems. They are not naked, as Adam and Eve are often portrayed in the Garden of Eden. There is no shame, yet the figures are not sexual. They are just there, as if they never wore clothes. Yet not innocent as Brooke Shields appeared in The Blue Lagoon. 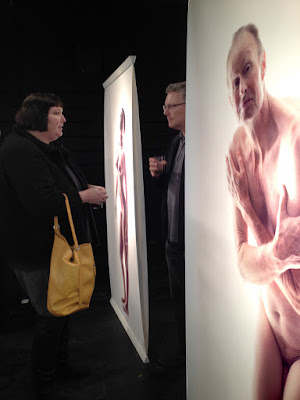 And perhaps the man above was being a little shy. They are not nudes, as in an Edward Weston or an Alfred Steiglitz. They are not romantic. And they are very beautiful. But not beautiful like a flower, or a lion. They show more the effects of living in the 21st century. Their bodies did not seem to have been physically challenged to survive. Some have been worn from the effects of aging. Others have been shaped by their love of food. 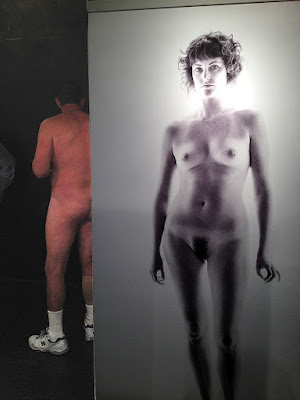 George said that he was trying to redefine the nude. These are non-sexual figures. They are not idealized figures, but were photographed with the care that one might use in photographing the last of a species of a beetle soon to go extinct. The light from behind obscures the edges, so they appear like sources of energy rather that objects reflecting light. They are one with their surrounding spaces. As imperfect as these specimens are, they are part of the world, melting into the space that we all share. They are us. We are them. 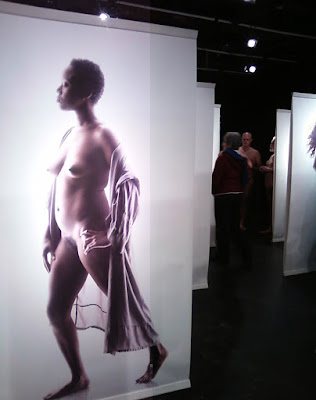 Well, Master MO, You forgot to tell us if you bared all? H.

how could nudity ever be obscene, purely a cultural thing i guess