I told my daughter to tell her kids that you can cut an earthworm in two and each part would grow the missing part. My smarty wife googled it and shamed me, telling me that it wasn’t true. The head would grow a new tail, but the tail would not grow a head. She had never heard about it as a kid. I figured that earthworms in Chicago could grow a head, while those in the middle of Illinois could not. 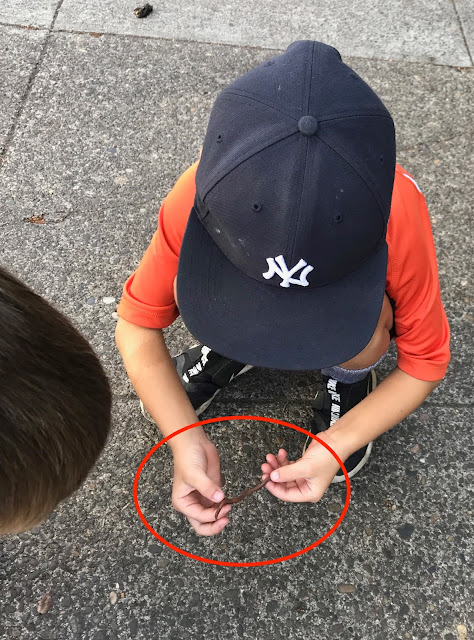 Then I asked some others and they believed the same thing, not about Chicago vs. middle of Illinois, but that bisecting earthworms would increase their population. So what do I really believe now: what I grew up believing (and didn’t adequately test), or what my wife of 50plus years Googled? No comparison! Though I realize that’s slightly ambiguous as I meant it to be.

Yesterday I had practice discussion with a Zen teacher and was describing how I was angry at what someone had done, and she suggested that I try to look at who was it that was angry. When I saw the picture of the worm, I thought about her question. Maybe I could just cut the anger off. I wonder if people who are cutters want to do that. Just cut the anger off. And then it will go away.

Certain places and people seem to be triggers for anger. They don’t do things as I would like them to be done. Someone believed that I didn’t pay for a workshop, so they circulated a signup sheet with a comment next to my name, “Did not Pay.” I’m not positive my credit card payment went through because I have a vast amount of credit cards and don’t have the time to check, but I do have a note from them that I did pay. But whether I paid or not is not really relevant. There are other ways to tell someone they are delinquent than public shaming.

So I wrote to them that they embarrassed me. In accordance with their typical practice, so far they have not responded.

But anger. In Zen, we talk about equanimity and tolerance. Why can’t I just say that some people are different than others? Why can’t I forgive someone for not realizing that they meant no public shaming... they simply wanted me to know that I didn’t pay and they didn’t have time to send an email.

So let’s say I was a Bodhisattva and my path was to save all beings from suffering. What would I do then? First, I’d not be so concerned about what I was feeling as what they might be feeling. If someone is not thinking and they hurt your feelings, what do you say? If you say, “you are not thinking,” you might hurt their feelings. Will you ease their suffering?

This would all be laughable if it was the first time that poor communication occurred. But every interaction with this institution has the same result. Perhaps I am just overly sensitive? But when I am treated well in some communities I feel especially hurt by others.

I remember a situation in another community where someone was given a single bed sheet for a double bed. There are options and possibilities here. One could just return the single sheet and ask for a double. Or they could use the single, being thankful for having a sheet. Or they could stomp their feet and feel insulted and unliked.

We can choose. But what response makes the world a better place? Letting someone walk all over me doesn’t work. Going postal doesn’t work. Is it enough to tell someone how you feel? Should I have just assumed that they met no insult when they said, “didn’t pay.” Should I now follow up with a second email or phone call and ask them what they discovered? Or wait it out?

P.S. Planarian flatworms are able to reform their entire body from slivers just 1/300 of the animal’s original body size. Ain’t that a miracle!
at August 05, 2019