Norman Fischer was asked what was the most important job he had done as abbot of a large multi-location zen center. Unexpectedly he said, taking care of myself. I’ve been hearing those words all week, and finally, this morning, skipped meditation and just got to the temple in time for the dharma talk. It was quite a treat “not to rush.”

I mentioned a few days ago that the Dalia Lama sits four hours a day. Is this a similar effort?

In the Buddhist world, generosity is considered the most important perfection. Norman recently wrote a book on it. So one might have expected that he’d say that the most important thing he did was to serve the homeless, or some such thing.

It is kind of obvious why he took care of himself. For the same reason, when the oxygen mask drops down, you first put your mask on, then your child’s mask. Perhaps it seems a little counter-intuitive at first. 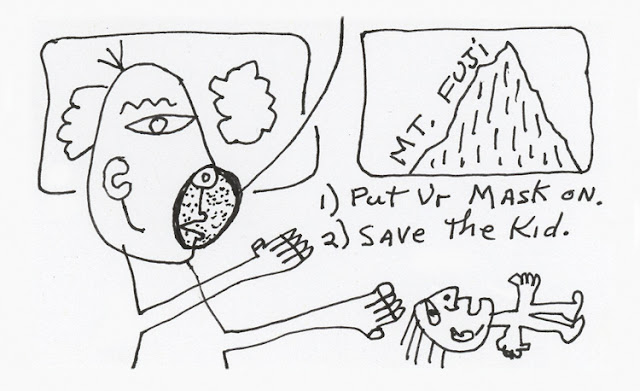 People think I’m abusing myself by eating nine meals a week. It is actually feeling like the opposite. The meals are good, and I’m looking at my next meal with mixed feelings. It seems like abusing one’s body to be in a constant state of digesting food.

People think writing my blog and drawing a picture every day is excessive.

People think sitting every day is excessive.
How about being married for 50 years plus a few days?

There are the moderation advocates. But what is moderation? Really? Buddha’s disciples were ready to throw him out with the bathwater when he broke his diet of 1/2 of a grain of rice a day. He prescribed that the monks should finish eating by noon. They wanted to do an evening begging round, but Buddha said that would be putting too much of a burden on the laity.
at August 18, 2019