No politics today. Your comments gave me a lot to think about. In the end, it might be easier to see the problem than the right solution. For example, if your finger is sore, your first thought might be to cut it off. Other than the phantom feeling that might occur, your sore finger will be gone. But that’s winning the battle, not the war.

Last night we did our once-a-month koan study. I chose this koan. Actually, it chose me. I used to look for a koan that I understood. Now one finds me that I don’t understand (which is easier because it is all of them).

Mokugen was never known to smile until his last day on earth. When his time came to pass away he said to his faithful ones: “You have studied under me for more than ten years. Show me your real interpretation of Zen. Whoever expresses this most clearly shall be my successor and receive my robe and bowl.”
Everyone watched Mokugen’s severe face, but no one answered.
Encho, a disciple who had been with his teacher for a long time, moved near the bedside. He pushed forward the medicine cup a few inches. That was his answer to the command.
The teacher’s face became even more severe. “Is that all you understand?” he asked.
Encho reached out and moved the cup back again.
A beautiful smile broke over the features of Mokugen. “You rascal,” he told Encho. “You worked with me ten years and have not yet seen my whole body. Take the robe and bowl. They belong to you.” 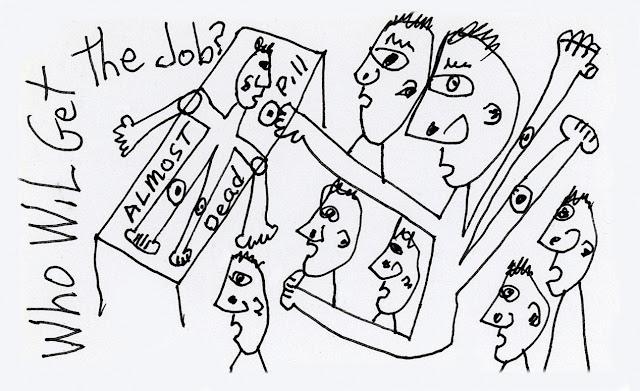 A severe face became even more severe. Why? Why did Encho move the cup back? What is a teacher’s whole body? How is the moving of a medicine bowl an expression of the real interpretation of Zen?

When I told G1 and G2 the koan at lunch G2 said she didn’t understand it. Then she told me a story about a man who came late to lunch and his friends asked him where had he been and he explained that he’s a writer and he worked all day and he added a period to something he was working on. The next day he was late again, and he repeated that he was a writer and that he had been working all day. One of his friends asked, “Added another period, did ya?” “No,” he said, “I took yesterday’s away.”

Just before Ninakawa passed away the Zen master Ikkyu visited him. “Shall I lead you on?” Ikkyu asked.
Ninakawa replied: “I came here alone and I go alone. What help could you be to me?”
Ikkyu answered: “If you think you really come and go, that is your delusion. Let me show you the path on which there is no coming and going.”
With his words, Ikkyu had revealed the path so clearly that Ninakawa smiled and passed away.

It is something to do with finding the appropriate action or response. The rabbi and I today talked about Christ saying that he was the son of man. The rabbi confirmed that the original words mean “son of Adam” and Jesus, being a good Jew, would have known that. Yet Jesus was faced with disciples who wanted him to be the son of God, so he answered somewhat ambiguously. He could have just said NO, but he had to think of his audience and what would be an appropriate response.

I read about how in a bad airplane crash a body might be in a thousand pieces. But what do you tell a kid? Maybe something like he went away because his life had ended. TMI (too much information) is not always helpful. Christ had teachings to convey. Could he have been successful if people believed he was just like them? He couldn’t lie. But he did say, “Therefore speak I to them in parables: because they seeing see not; and hearing they hear not, neither do they understand. And in them is fulfilled.” (Matthew 13:13-15)
at August 29, 2019