What did Buddha mean?

There is a story about the Buddha being asked where a temple should be built. He pointed toward the ground, and a blade of grass sprouted up, marking the spot.

Another story is that he was asked what a robe should look like, and he pointed toward a rice field and said, "like that."

A common interpretation of these actions is that everywhere is sacred. This misinterpretation shows how our Western minds generalize. I think he meant that this place "here" is sacred, as is this moment. Let's not go anywhere else. Be here and now... for that's all that exists, and, as my teacher reminded me the other day, even the here and now only exists in our minds.

Dogen is said to have said that there is no place to spit (because everything is sacred). I tried to find this quote in his writing but could not. I wonder if he just meant that you should not spit here, for this spot is sacred.

What is it about us that wants to form opinions? Why is it not enough to stay with what we have in front of us. One problem with generalizing is that we've left the planet and have gone into our minds. Which is probably what my Western mind is doing now.
at November 30, 2011 3 comments:

I can't write anything tonight, I thought, because the dog across the street is barking. He's a basset hound. Now he has stopped. I guess either he respects writers, or else the arsenic laced turkey leg did the trick (just kidding).

Anyway, I think pets are silly. Sometimes cute. Sometimes smart. But what a waste of money! I hear stories of people spending vast amount of their money and time caring for their dog. Most of my life I had dogs. Finally I resented the commitment.

So now that I've complained about the Christ in the doctor's office, and the dog across the street that is barking because his master is gone... what is next?

I have a complaint bracelet that I'm supposed to wear... so I don't complain. If you wear it and you complain you are supposed to change it to another wrist. I only have two wrists so I took it off. I guess I could wear it at night... if I had a virgin wrist to put it on. 21 days is all you need to be perfect (not complain). See: http://www.acomplaintfreeworld.org/

So the dog's owner just came home and I saw him find my note stuck in his door, telling him that his dog was backing. Luckily his dog was barking when he came home... so he won't think I'm delusional. I left my phone number... I wonder if he'll call me.

When you walk dogs here you carry some bags and then you have to scoop up the poop and carry it home. That is not one of my favorite things to do.

Guess I'll volunteer to take care of my daughter's dog next week when she goes out-of-town. He's quite a special creature.
at November 27, 2011 2 comments:

Here is a short clip from Noam Chomsky. He articulates why we should not to spend much time on climate change denialists. I love his comment, "you don't have to be an expert."

There is another group that is not on board with the predictors of doomsday. These are the thinkers who dare to question their colleagues about such a politically charged topic.

I'm reading now a great book, Useless Arithmetic—Why Environmental Scientists Can't Predict the Future, that describes in great detail the difference between qualitative and quantitative modeling... and why in a complex and chaotic world our guesses about outcomes have been so prone to failure. I just read the chapters about fish and AIDS (different chapters). Our numbers were so wrong about what would be sustainable fishing that we have wiped out entire fish populations. Our numbers were very much guesses on the numbers dying of AIDS in Africa. Even the numbers on second hand smoke are very suspect, though we know (qualitatively) that it ain't good to breathe SMS.

I was amused to read about the Oracle of Delphi, who for hundreds of years, told people the truth... always in a stupor. It was later found that the river behind where the Oracle hung out emitted ethylene, a gas that has been used as an anesthetic.

Emotions at the Doctor's Office

I started thinking about those who don't celebrate Christmas. I felt that they were oblivious to me who doesn't accept Jesus as the son of God. He was a very cool dude, though.

That office has an international clientele. How many of them belong to an assortment of other religions, or no religion? What would they think about the Christmas decorations? Did the nurses and doctors realize that Christmas isn't for everyone.

In California, there is a cross on Mt. Soledad... or was, until enough people complained. Click on the link and read the article.

Is this different than a Christmas tree in a quasi-public place like a doctor's office? I remember that in the Community College where I worked we passed a rule that office holiday decorations had to be non-denominational. I liked that.

Should I complain to the doctor's office? I'm already the trouble maker because I suggested that the nurses change gloves from one patient to the next. They told me that the gloves are to protect the nurses, not the patients. 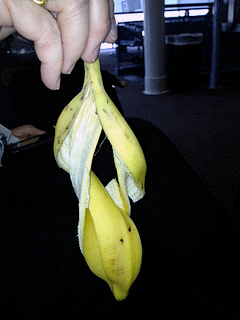 Banana peeling was found at Ohare airport turning itself inside out as a protest against Global Climate Change. Airport police were called to douse it with pepper spray but they were stopped in their tracks by coed with smart phone. Canine patrol was then brought in to "bark it into submission" but instead the dogs laid on the backs and laughed. If that wasn't enough, Grandma Moses, flying back to her home in Iowa, started laughing so hard that the banana peeling jumped into the mixer at the juice bar to become totally masticated.
at November 21, 2011 No comments:

Yes, Kate, teach all the denial theories too!

Kate asked, when reading that I suggested that both sides of the global warning issue should be presented, whether I thought that intelligent design should be presented in a course on evolution. My first response was "no," that is different.

But then I remembered a lecture I heard by a mathematician about why we shouldn't teach intelligent design in the schools. He proceeded to teach a lot of very interesting science in disproving intelligent design. As I listened to him, I started to visualize students coming to school with backward thoughts and how important it is to their education that the errors in their thinking be discussed.

I'm now visiting my in-laws and had the global climate change discussion with my father-in-law. Like 53% of the tea party, he believed that man probably didn't cause climate change, and that soon it was just as likely that it would cool down as it would start to warm up.

I did feel like taking the other side but quickly realized that I would not be able to convince him that, as my global warning teacher says, we are on a train, doing our "own thing" and that the train is about a mile from the edge of a cliff... and soon we would all die.

I wished then that I could show him charts and graphs proving our demise. What better deed would there be than to save the Earth?

I suggested to the teacher of my global warming class that we hear both sides. He said that he'd been told that if you go there, the class will be hijacked... and you'll never get it back.

I remember my frustration in college, trying to guess what the professor thought about the subject. Did he like this or that artist? Did he like capitalism or communism? Socrates or Kant? It was a good frustration.

In Pilates today my teacher said I was holding my breath. I told her I was mad... and so I started to vent about how I was more interested in the debate than in the resolution. I told her that I'd believe in God if no one else did... just to keep things alive. She didn't believe me.

But it is also that I have a place in my heart for the underdog.

Today some were clapping because a coal plant was being shut down. I felt sorry for the plant, no longer useful to man. I Googled "clean coal" and found a nice article about how we were going to great ends to make coal more tolerable.

If I hear once more that global warning is true because "so many scientists believe in it" I think I'll ... Since when is this a test? I'm not saying that the Earth isn't warming up, or that man didn't cause the warming... I just would like to know more about how we know that.

I named myself, "Mr. Contrary" and a friend coined "El Contrario" which I like better.


1) What is happening to the Earth?

2) What is the effect of what is happening?

3) If negative, how can we prevent what is happening?


I believe this is a great opportunity to learn about statistics and extrapolation.

Unfortunately (said partly in jest) I'm more interested in the examination of the knowledge and how it has polarized believers and non-believers than I am in the condition of the Earth. How could I take such a heartless position? Probably because I am so skeptical that we know the effects of our actions in such an interconnected world.

In the meantime, I remain committed to what the zen teacher Reb Anderson said, "walk on the Earth as if it is your mother's face."
at November 17, 2011 7 comments:

Non-profits in a Free Society

Non-profits benefit by their status, allowing them to not pay taxes. They have resources paid for by other citizens, including fire and police protection. Other citizens pay for these resources by coercion, though they may not necessarily subscribe to the aims of the non-profit, whether it be a church or a planned-parenthood center.

Next time I'm asked to give to a non-profit, I should say that "I give at the office." It would be a true statement (if I had a real job).

Sometimes non-profits decide to persuade others to think as they do. This might be to accept Jesus as their lord and savior, or it might be to use every means available to keep a pipeline from being built. Again, this points out the problem of forcing individuals (through taxes) to support an organization that might be advocating for a position that is not their politics of choice.

Some might think the non-profits might sink if they did not get this support. Some will. Others will enjoy a new freedom, where they can now support political action and candidates to their hearts content. And they might get more support from like-minded individuals.

And should these individuals be able to deduct their contributions? No! That is just another example of the government supporting the non-profits by subsidizing individuals who give to it.

We could transition to this new status to free non-profits over a number of years to give them time to develop a new base of support.
at November 13, 2011 No comments: