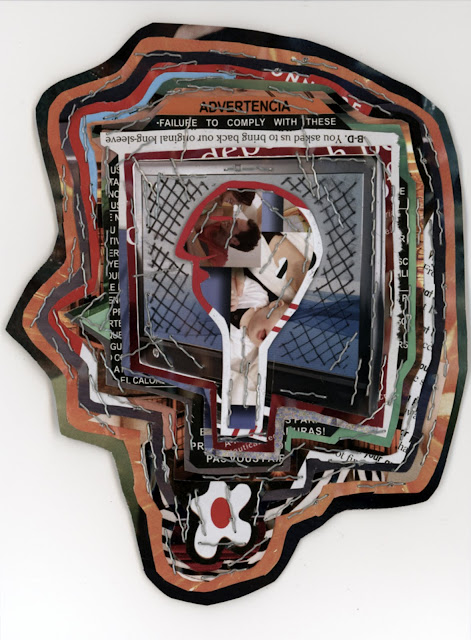 I have both a Champion and a Vitamix for "juicing." I use the Vitamix every day. I use the Champion for making peanut butter.

The Vitamix is far superior, because you don't waste all the pulp... and you can put anything in it. It is a lot of money... but well worth it. You can find reconditioned ones at their site... and they have a long guarantee. There are also some on ebay.

Here's my typical daily juice (I actually have a glass at each meal.

It cleans up very quickly, which is another advantage. I just put some soap in it with water and turn it on.

Masticating and centripetal juicers waste all the pulp, are limited by what they will juice, and are a pain to clean.

If you have too many of anything to use up... freeze it, and then you can juice it later. Or you can pour your juice into an ice cube tray and use that as at a later date.
at February 22, 2012 3 comments:

The Politics of Birth Control

In the NYTimes today, I was dumbfounded by the article, Bishops Criticize Proposal on Birth Control Coverage.

Once could rewrite this to read (without changing the meaning),


All insurance companies shall provide employees birth control, should an employee desire it.

We know that the "no charge" is bogus, for birth control will be an expense for the insurance company ... and like every other expense, it will not come from the CEO salaries.

There is another issue that Uncle Obama (aka Sam) shouldn't be telling insurance companies what they should provide for free or otherwise.

I liked this article on Money and Morals by Klugman. I thought that since Rick Santorum is now a viable candidate, the election is about religion (what Klugman calls morals).

Mr. Obama is trying to satisfy everyone, and Santorum appears to be stuck in the quicksand of his own set of beliefs. Apparently Santorum will slide to third place after Arizona, Michigan and Ohio... so birth control will once more be usurped by $$$.
at February 11, 2012 No comments:

Here are some hints:

1) Amazon sells Namaste Perfect Flour Blend. Best price is to buy 6 bags of the flour on the subscribe and save deal. You can unsubscribe after the purchase if you want, so you aren't signing your life away. It is 48.10 for 6 bags... and that's the best price I've found. It says on the package "not for bread" but the grandma of Namaste figured out how to use it for bread. Also for sale at Central Market in Austin.

2) There is also a recipe on their website for a bread machine, but it is too difficult to get my machine to do one rise instead of two (preferred with gluten-free bread). And the bread machine doesn't cook it for long enough. Some suggest to put it in the oven after you cook it in the bread machine. t have a great bread machine for sale (cheap).
2) Cheapest yeast is at Sams or Costco. I freeze most of it, and refrigerate the rest. I mix it with water at 110°.

3) The consistency is that of cake dough, though I've never made a cake. It isn't possible to knead this by hand. You'll need a mixer (like Kitchenaid). I have an old Hobart... which works great on even a double recipe.

4) I use olive oil. I think that gives it a better flavor.

5) I've used both rice milk and almond milk. I think rice tastes better ... but both are fine.

6) I use tapioca flour ... just because I'm anti-corn products.

7) I use Energ Egg Replacer (Central Market in Austin).

9) Take it out of the pan when done and put it on a rack. Don't dare cut into it until it is cool.

10) I switch off between agave and honey. Some macrobiotic folks are suspicion of agave. I'm not sure what I'll do when I run out of agave.

11) You need to toast it to eat it... and it takes the highest number on my toaster. Though it is great in bag lunches... even if you toast it earlier. 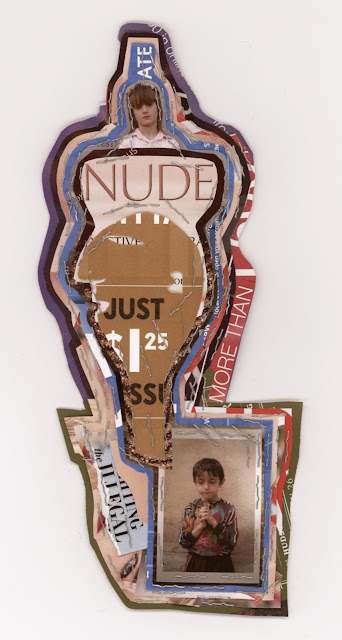 Click on collage to enlarge
Miss S sent me this about John Cage:


On Monday evening during the second program in Sound Reimagined: John Cage at 100, the Juilliard School's weeklong tribute to Cage, some recorded excerpts were played from Lecture on Nothing. Cage gave this famous talk in 1949 at Darmstadt, a hotbed of avant-garde music in Germany. In his soft-spoken, almost expressionless way, Cage was an effective speaker.

At one point he says, "If among you there are those who wish to get somewhere, let them leave at any moment." Cage was not just graciously inviting uninterested listeners to leave. His point, I think, was that we all create our own perceptual experiences, including when we listen to music. If our attention flags during a Beethoven symphony, we are not failing the task of listening. Rather, our wandering thoughts become part of the musical moment.

So is it possible to be a bad listener? I wonder what he'd say. Probably, no. Perhaps only if you want to get somewhere else, you can't be here. Or perhaps if you want to gain anything, you can't/won't participate.
at February 03, 2012 1 comment:

So what's wrong with criticism, anyway?

I needed to go to the grocery ... to buy some chicken and soy sauce. I didn't want to buy chicken, but my wife gave me that look, so I decided to abide.

I also didn't want to spend a lot of time, so I thought I'd drive. But when I went out, and found it to be sunny and 73°, I decided to walk.

To get to the grocery, I need to cross one busy street, Lamar. There is a button to press on the light pole. I pressed it a few times, but then didn't pay attention to the light, and it took a couple of rounds before I saw the green walk now signal. The sign just lasts for a nanosecond.

When I arrived at the grocery, I thought I'd go in the door of the food court and get some of my favorite soy-vegan gelato. Outside the door was what appeared to be a homeless man. He said "Hi Randy, haven't seen you for a long time." I smiled at him and walked on, wondering what part of me looked like his friend Randy.

There were two women at the counter when I asked for the gelato. One said to the other, "you get the gelato and I'll ring him up."

I went to an outside table to sit and eat it. The air was breathtaking. Breathtaking, that is, until I realized it was breathtaking. Not soon after the realization, I smelled a whiff of garlic as a couple of men carried their lunches to the empty table next to me. One said to the other, "that looks healthy," as I was thinking to myself "that stinks," I thought the smell would soon go away. "I was in the vast outdoors," I thought.

Next thing I knew I got up from my table and walked to another table, away from the garlic. I enjoyed the rest of my gelato listening to the birds, and reading the weekly [Austin] Chronicle ... and not smelling the garlic salmon.

Then I went to wash the gelato off my fingers, and proceeded to get the soy sauce and chicken. The chicken, however, didn't look too good. Instead I bought a rotisseried turkey breast. Hopefully our guests tonight will like that with vegetable soup and spinach salad.

As I write this, I'm fascinated by the cycle of perception/sensation/judgment. I remembered learning about the Buddhist 5 khandas [Heaps, Aggregates] which describe the process we go through when something new comes into our space:


Consciousness is the tough one for me right now. Rather than being "with" the object, I make endless judgments: the homeless man, the not-so-good chicken, the smelly garlic, etc. I'm not just conscious of the object, I'm putting it on trial and convicting it all at one swoop.
I decided rather than to get a cart or a basket at the grocery that I would just use the bag I brought with me to carry the groceries home. Then I started fantasizing how someone was watching me from an office and was ready to arrest me if I left the store without paying. There is one counter to pay by the door for those who have only a few items. I went there, and a large nicely dressed cop was there, with an even larger gun. I looked to see if he had something in his ear that they had used to communicate with him that a possible turkey/soy sauce theft was soon to occur. His ears were clear of any electronics, so I felt safe, checked out, and started walking back home.
As I waited for the light to change, I started listening to the sound of the cars ... and how they were different from each other. I only realized a few minutes later that I had watched Margaret Dunning, age 101, talk about how different cars used to have different sounds. Wow, I thought, they still do.
Walking home, I continued to focus on the sounds of the birds and the cars. I noticed that I couldn't simultaneous think "beautiful spring" and hear the sounds. I wanted to take my sweatshirt off, but didn't. I wonder now how hard my poor brain worked debating whether or not my sweatshirt should come off.
Earlier, I had written something to Miss S. about criticism. On the walk, I had tried to keep away from judgement and to just be thinking and feeling, rather that being conscious of my thoughts and emotions. I found it a difficult road... not to criticize, not to be conscious of being conscious. The judgment realm kept getting in the way. "I like this, I don't like this."
When I get to the judgment realm, I leave the experience realm. That's the problem.  I am blind, lost in my recent but past experience.

So when I listen to sound of traffic and start to realize that it is good or bad... at that moment I have stopped listening.

Criticism is often hurtful... not necessarily skillful means. Not only does it deprive me of being in the company of another or even of myself, it also puts me one up on you. Better to just let the other know how I am feeling. That is communication. Or maybe (sometimes) just keeping my mouth shut is the best policy.

In Zen, there are three tests for right speech:

It is hard, thinking back on my criticisms, to find those that pass all three litmus tests. I think one of the reasons that the Buddha gave 20,000 different dharma talks is that he had something different to say for each unique occasion.

One of our guests tonight had worked in a bar for many years and is extremely skillful at reducing arguments (esp. about politics or religion) to nothing. I admire her ability to do this.