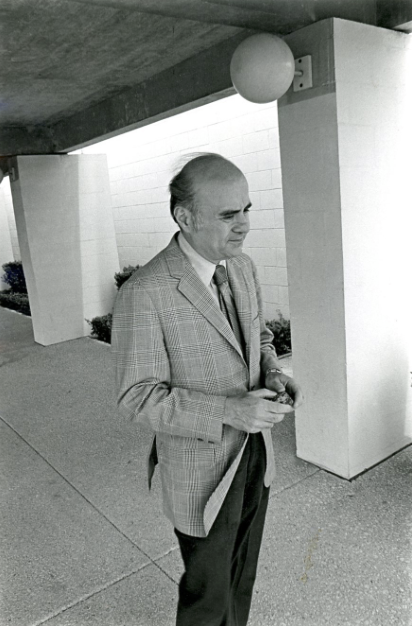 I was going to write something about the difference between grieving and compassion. If we are all suffering, as Buddha surmised, then we might grieve for others as we are feeling compassion. But I'm not going to write about that. Maybe.

My relationship with my dad was complicated, as people like to say on Facebook. There is no doubt that he was a stellar guy. He was smart and kind and funny. He knew so much, but never rammed his opinions down anyone's throat. In fact, many of his friends held ideas diametrically opposed to his, though that never shook their deep admiration for him.

He had one father who died when he was an infant, and a step-father who was not very nice. He basically was fatherless. He married a woman who thought that she knew everything about raising kids, and despite his intelligence, she felt that he could do no right. She'd say, “Shut up, Edmond,” when he'd try to be the parent. So I didn't have much of a father. If I tried to remember things that he taught me, like tying shoes, it would be a very short list.

On the other hand, he taught me a lot. He taught me how to deal with difficult situations. One day he told me, “you can never move too slowly.” I asked my students what he meant by that. Finally we made some progress toward understanding this koan. So I called my dad and told him that we figured it out. He said, “figured out what?” “What you said last week, that you can never move too slowly.” “That's the stupidest thing I've ever heard,” he said.

That was my dad. He said things not because they were set in stone, but because they might get someone to consider a new way of looking at the world.

When he was in hospice, they asked whether he'd like a priest, a minister, or a rabbi. “A philosopher,” he said.

He was generally disappointed with his kids. It wasn't that we were complete failures, thought sometimes we were headed in that direction. Rather, we had cousins that went to better schools and were very successful before they were 30.

In the passage “Knots” we read tonight, a knot kept the father from expressing his love. Or maybe I should say, “his like.” Both of my parents were full of love, but in their very critical mode, found it difficult to like many people. We all had faults. I couldn't tie my shoes. My sister couldn't keep her bangs out of her eyes. Someone else raised their kids wrong. And on and on. It got to the point where I didn't want love anymore. I just wanted to be liked.

The other day I went to a performance by three-year olds. It was a marvel how the teacher was totally ok with the students’ ineptness. It was a joy how she made all the kids feel comfortable and do their best... and even if they weren't ready for center stage, that was ok too. I wish she was the one who taught me to tie my shoes.

P.S. (Credit card track) Wasted time today looking for a credit card bill. Finally found it, but the vendor had put down the wrong last four numbers that really messed me up. I did cancel one card today. My wife said she'd come home if I cut my cards in half. Actually I have eight in her name to cancel. Is it ok for me to pretend I'm her when I call them (and save her the grief of calling them)? Another moral dilemma.
at January 12, 2016

Kim,
Thank you for sharing this blog. I thought for sure it was about Edmond's ties....