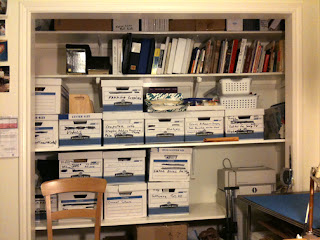 We had a discussion the other day about practicing. In this case, it was "sitting." But I kept thinking about practicing art. And how Jerry Savage (one of my teachers) said that in ten years, only one out of a hundred art school graduates will still be making art.

I often hear from former students who aren't making art. They feel a little apologetic, and I sometimes think that I failed them.

And I think of John Cage, who was asked by his Buddhist teacher for a greater commitment and he said, no, he had promised his music teacher that he make music.

Most of the people who continue throughout their lifetime to make art are pretty good. They might have gotten that way through lots of practice, though maybe it was the other way around.

Today I was re-befriended on Facebook by my first art muse. She had grown up with parents as artists, so she had learned the ropes from birth. And now it is almost 50 years later. How time flies!

When the current Buddhist head teacher here was applying for the job, he said that we all practice perfectly. That's a common Zen statement (that we all are perfect). And the second part of it is that we could stand some improvement.

So why the guilt? We admire mechanical men who seem to be in control of everything. Yet, when push comes to shove, we might eat a second piece of pie, knowing that if we were better, we would have just enjoyed the first piece twice as much.

This week I built some shelves in my closet. It was something I've wanted to do for a couple of years. Art is like that. We admire people who are productive, yet sometimes we just procrastinate.  And sometimes we just repeat ourselves, making it look like we are still breathing (and fertile).

Repitition furthers is an ancient Chinese slogan, and don't we benefit from finding many variations on a theme

"Yet, when push comes to shove, we might eat a second piece of pie, knowing that if we were better, we would have just enjoyed the first piece twice as much." You saved me from going back for another helping of cashews! H.