What Matters? A conversation with Ed. 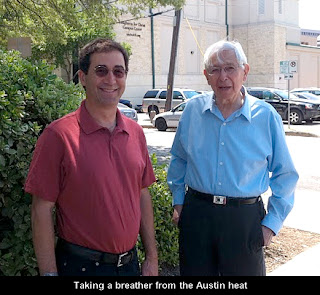 (l-r) Cousin Mark and Uncle Ed
I asked my uncle about truth last weekend. He asked for an example. I said, "are we awake or dreaming?" He said it didn't matter because we wouldn't know that we are dreaming. Then we talked about Intelligent Design's position that God created everything 7000 years ago, including predated fossils and light rays coming from the stars. He said that doesn't matter. We would still behave in the same way. I asked a friend. He said that if the world was only 7000 years old he would devote his life to proselytize that.

Then I thought about the Buddha who was asked if there was an afterlife. He said that there was too much to do (in the effort to save all sentient beings from suffering) to dwell on that. Was he saying the same thing as Uncle Ed?

Later I remembered that Bertrand Russell wrote in his autobiography that he used to worry about all kinds of things, but then one day realized that no matter what happened, in the immense universe it really wouldn't make much difference. Likewise, we all are invaluable where we work—until we get sick or are fired, or retire. Then our place of employment gets along fine without us.

When Ed mentioned that it didn't matter to him that we may be dreaming... or that the universe may be 7000 years old, it didn't feel good. I was feeling that I may be duped by falsity (like we aren't dreaming), and not know it. It would be a grand delusion in the Buddhist scheme of things.

Always to add to my confusion, I had "dokusan" with my zen teacher the other night. I asked him about "what matters" and he said (over about 35 minutes), "everything and nothing."

In the meantime, having no barometer to live my life, I started thinking about Reb Anderson, another zen teacher, who said that you should walk on the Earth as if it is your mother's face. If something as mundane as walking on the earth (as a metaphor for everything we do) matters, then, at least in the relative world, everything matters.

Back to "dokusan" I did learn one thing that was important to me. I have delusions like we all do. We believe that things are as they appear, when in reality that appearance is a construct of our mind. We can't help that. What I can do is to not beat myself up for having those delusions. Rather, I can just say, I have delusions, and I can work to know and accept them.

As to how to decide where to put my eggs,* I guess I'll have to keep working on that.

Clearly, the monk who wrote the Diamond Sutra would not have told you (1) either not to beat myself up for having delusions, nor just to say "I have delusions, and I can work to know and accept them." That would be way too Aristotelean for him, too linear, too A=A. That unknown monk, or group of monks, found the answer in non-Aristotelean logic, in the signless nature of signs.