Short time with Charlie in the car while my daughter went into the drug store. But we got lots done. Took about 30 pictures. We worked on the vowels. I associated each vowel with a finger, as if we were counting with sounds. He tried to say some of them and was really interested (it made him stop crying (he was hungry)). We also counted and went to 5 instead of 4. I'm fascinated with the fact that we can count different elements in the same group and form a relationship that didn't exist (like 4 fingers and 4 apples). Oh, we also talked about fingers being part of the hand and the hand being part of the body and the body being part of the world. He's not quite ready for that, but it will be old hat by the time he is. Oh, I introduced up and down, a totally confusing concept that can't be explained unless you already understand it (like most concepts). Not bad for ten minutes in the back seat of a car! 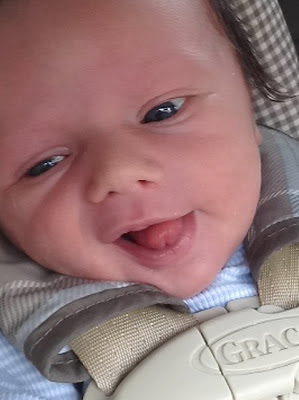 Your will to educate and enlighten continues to amaze me, H.