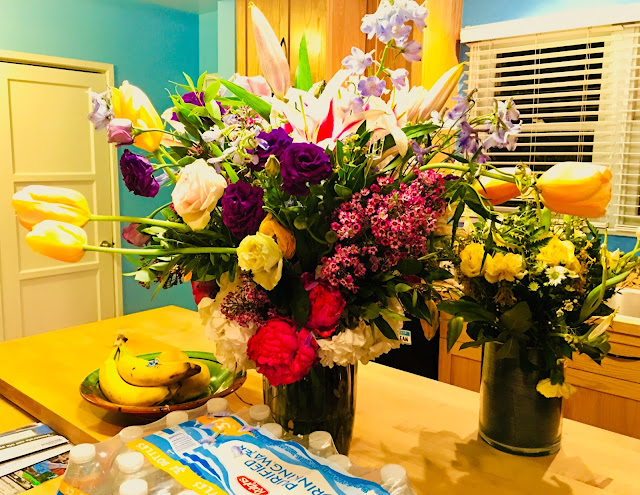 I guess people want to know how's Gail. When I came here 3 days ago, I was more concerned whether there was still a Gail as I have known her for 71 years. And she is absolutely Gail, which renews my faith that she isn't being altered by her circumstances.

I kind of wished that she'd be more accepting of my Zen stories. Fortunately, she is no different on that accord that in the past, which contributes to my conclusion that she's the sister I've had and loved all these years.

Luckily she is able to advocate and organize her treatment. This involves shots, medicine, calling doctors, and eating, sleeping etc. We talked about those unfortunate souls who are not able to do this, and also those who don't have a husband, a brother, friends and two terrific grown children to look after her.

Our parents were convinced that life wasn't worth living if you weren't able to walk, play tennis, and be independent. I think Gail is not of the same elk, which isn't surprising since she was never the obedient daughter. I'm thankful for that, because not only do I still have the same self-directed sister I've always had, but she has been an encouragement for me to not do as I am told. In fact, I've prided myself on never doing as I'm told—which somehow has worked out except in the Zen temple.

Friday she has a new cat-scan and then possibility some radiation along with the chemo. Her attitude is great as she just sees this as the job at hand.

Someone sent her a giant bouquet of flowers. Some of the petals are falling off. Several times a day I pick them up off the table and floor, and enjoy the endless abundance of remaining flowers. That is Gail. Still an abundance of love and beauty, yet with a few of her petals falling to the ground.
at April 12, 2018

Kim, What a lovely tribute to Gail and her two kids. I,m glad you are here for her. All the best. G.

What a touching tribute to your sister,Gail, I experienced you as a less than articulate friend in our early years but as you have matured, you have become so sensitive and articulate in your poetic writings. I wish we had lived closer to Gail so I would have gotten toknow her better. H.

Kim--thank you for sharing your update. (It says I'm anonymous, but this is Adam...).

I just now found this lovely tribute when I was looking for that picture of Gail that you included on some message to me way back when I was first becoming involved in y'all's caring for her. I want a picture to include on my Dia de los Muertos this year, when I have a little ritual, read Kaddish, etc.