He talks with his glove... 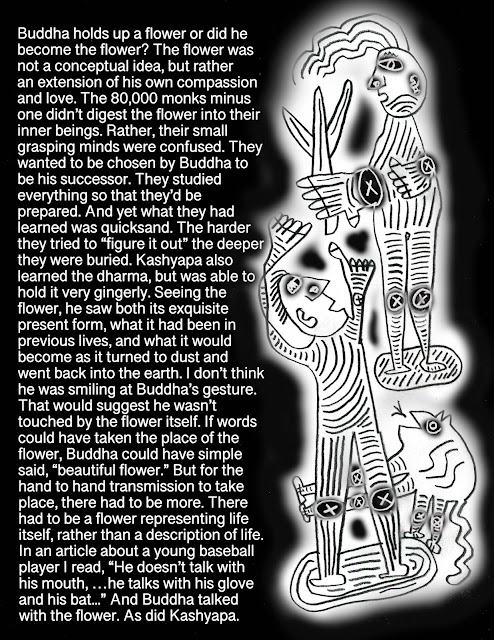 Buddha holds up a flower or did he become the flower? The flower was not a conceptual idea, but rather an extension of his own compassion and love. The 80,000 monks minus one didn’t digest the flower into their inner beings. Rather, their small grasping minds were confused. They wanted to be chosen by Buddha to be his successor. They studied everything so that they’d be prepared. And yet what they had learned was quicksand. The harder they tried to “figure it out” the deeper they were buried. Kashyapa also learned the dharma, but was able to hold it very gingerly. Seeing the flower, he saw both its exquisite present form, what it had been in previous lives, and what it would become as it turned to dust and went back into the earth. I don’t think he was smiling at Buddha’s gesture. That would suggest he wasn’t touched by the flower itself. If words could have taken the place of the flower, Buddha could have simple said, “beautiful flower.” But for the hand to hand transmission to take place, there had to be more. There had to be a flower representing life itself, rather than a description of life. In an article about a young baseball player I read, “He doesn’t talk with his mouth, …he talks with his glove and his bat...” And Buddha talked with the flower. As did Kashyapa.
at March 26, 2021