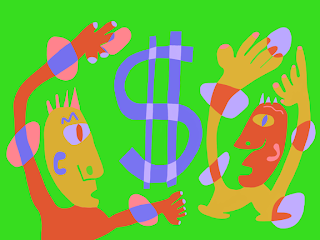 No, not global warming, but rather having limited resources. Most, if not all, people have to choose between this or that, and in the end, they don't even get to choose.

They can discuss the pie in the sky, but then reality sets in.

Debt is a very slippery slope. Some pay each month the minimum on their credit card bill, as they increase the balance. It is hard to see the fallacy in this behavior, esp. since it worked last month, and last year, and... And in the end they'll either get that job they've dreamed of... or go bankrupt... or become "dust."

Is a new car the best deal? Or is it better to buy the worst half of the life of a car for 3/4 of the new price?  And by buying a new car they get to choose the color/model/accessories.

Money. We talk about money until we are red. The elephant? In the end we don't "make" money unless we are counterfeiters or the government. We exchange it. Tit for tat. We give a part of our life for it. And then we give it for some part of someone else's life. Or maybe for some part of the earth that someone "claimed." It is the game Monopoly except... we believe it.
at September 05, 2010

Why don't you post a picture of your new car? H.

It is on a truck coming from Japan (or somewhere).

A&E has me all kinds of screwed up lately. Stupid Hoarders show. People with so much stuff they are just drowning in their mess. Like the trash lady from that movie Labyrinth who scared me so as a child. Got me looking around my house and thinking, “I’ve got to get rid of some shit before I end up on A&E.”

I remember this Buddhist story about a monk who becomes enlightened when he hears a conversation at the market. A customer asks the butcher, “Which cut is best,” and the butcher answers, “Everything is best.”

On A&E, I’ve heard it repeated many times that the reason these hoarder people seem so crazy to us is that they “value everything”. Everything is best to them and they get on TV because they seem so freak-show to us. And base line sanity is just putting the same stuff out at the curb for trucks to pick up and take ‘away’.

I have wonderful neighbors. One took some interest in some of the quilting stuff I’ve been into lately. He wants to encourage my hobby and he offered me a pile of scrap material that he had stashed in his basement. I too have a scrap material stash in my basement. It’s a big pile because I also inherited Jo Ann’s basement scrap pile when I first started quilting. So it’s two piles in one. At this point, I reason that I have to do something with at least half of my pile before I can graciously accept my neighbor fine pile of scraps. Otherwise my scrap pile will just be too big and I will be A&E crazy.

So now I have tasked myself with reducing a pile of odd colored and textured material (in order to bring in more material). I asked the ladies at my quilters group if they had ever made quilts with different types of material. They suggested it would be difficult but that this was exactly what people did in the old days when people just used what they had because that was all they had.

I don't know why people accumulate stuff. It seems that the same people who have trouble controlling their eating have trouble throwing things out. But not always. Someone told me that accumulators were abused and are protecting themselves with their excess.

Freud talked about how young kids don't want to flush the toilet because part of themselves would then disappear. It is very emotional for some people to throw things out... almost as if they are losing an appendage.

I read recently about a Quaker named Woolman from the 1700s. “He could not bear to ride in a stagecoach after hearing that in their haste they caused cruel hardships on men and horses alike.” What? I guess he’d be happy knowing that people don’t really use stagecoaches anymore. The ‘green movement’ of the 1700s doesn’t even seem fathomable today.

I just think it’s weird how bipolar our society can seem. On the one side there’s this issue of limited resources, water scarcity, on-going destruction of wild spaces. What are we going to leave the generations that follow us? We are using everything up. We have to be responsible with our consumption. Be green and be simple. I would call it a pervasive meme at this point.

Then there’s this other side of reality where we can order whatever we want online in less than a minute. We have storage units that we pay more money for to house the things that don’t fit in our homes. We live in a world where there’s reality shows where people who keep every plastic butter container they bring in the home is disturbingly shocking us. What scarcity are you talking about? Abundance is the problem.

Sure, I'll buy your point that abundance is a big issue. For some, and for others, it is scarcity. I read that there is a great scarcity of fresh water... something like .3 of 1% of all the water on Earth. The Buddhist nuns in St. Louis put a bucket under their shower to catch the water as it is warming up! Others water golf courses with millions of gallons of water. Such disparity of consciousness!

I remember getting into a spot of trouble once when I talked about ‘sustainability’ to an acquaintance. I remember he said that people had to stop buying, and wasting, and needed to recycle because there are not enough resources for everyone on the planet. I told him that I thought there was enough resources for people to live. This upset him a great deal because he felt that by saying this I was against recycling, or for wasting, or lord knows what he thought. But what I really meant is that I believe there is enough. We have enough. The Lord provides. I don’t really know how else to explain it. Are you changing your behavior because you fear there is not enough or do you behave a certain way because you feel you already have enough?

I remember Buddhist monks here in St. Louis giving us (lay practitioners who show up for meditation) the ‘be green’ talk as well. They have only robes and don’t even sleep on a bed. Then after the talk they served us canned Coca-Cola and bottled water and one monk excused himself so he could take a call on his cell phone which he had tucked in his robe.

I remember those monks with their dynamic meditation and cool cell phones... We want more to make us suffer less... and then we get it... and we worry about it. Did we get the right thing? How do I take care of it? Do I have to keep it out of the rain? etc. I heard a cool description of suffering the other day. Even if the road is smooth, the axil isn't in the center of the wheel. 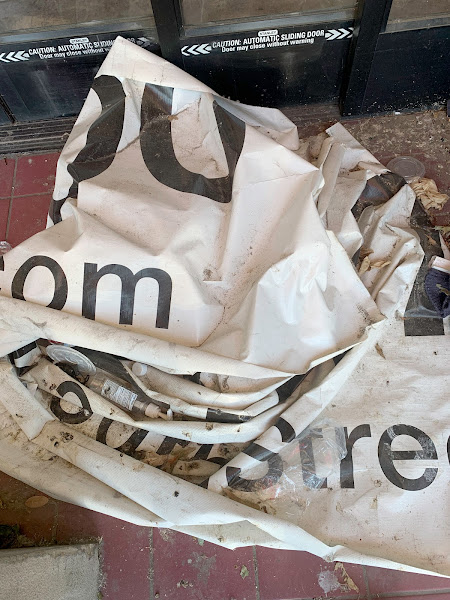