Last Thursday my pilates teacher, S, noticed that one of my breasts was bigger than the other... so then she started feeling around and felt two little bumps... so she told me to get a sonogram. I called my doctor's office (Dr. P) who said that I would need to see the doctor first, but she was busy until today, and that was a week ago, and that I could see the physician's assistant instead on Monday. I don't remember the assistant's name, but let's call her "A." (When I told my son the story he said it was a little confusing without any names.) So A felt the bumps too and sent me to have the sonogram. The sonographer woman, B, who was very cute, put this warm thick clear jelly on me and then rubbed this geiger counter over me and said that she didn't see anything but she'd show the image to the doctor "C." She left for about 15 minutes and then came back and said that C didn't see anything. 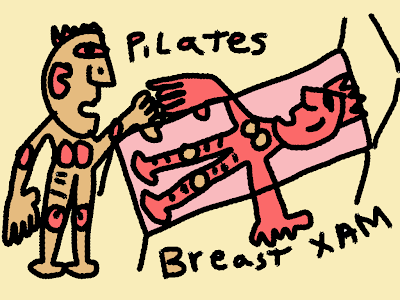 Later Monday A called me and told me that all they saw were cysts and that I would hear from Dr. P soon about what I should do next. My sister S who is different from my pilates teacher S because she lives in Los Angeles wrote me and asked me about the doctor's report. So I called Dr. P's office and the nurse for A said that I was on her list to call, and that the doctor (P) thought it was probably nothing, and that the sonogram showed nothing, but that my Dr. P wanted to see me to be sure. So I have an appointment on next Wednesday. In the meantime, my pilates teacher, S, who is (still) not my sister, texted her breast surgeon "T" who then called me later today and said he had looked at my sonogram and he didn't see anything and I shouldn't worry. (I asked T how he saw it since I didn't give him permission to look at it and he said because it was at ARA, which is where I had it done... Austin is a small town, I guess.) Anyway, I told T that I was going to see my Dr. P. on Wed. since he was going vacation. We agreed that if she suspected something she would order a bilateral mammogram that he would look at after his vacation. I don't know where T was going on his vacation... nor does it matter.

I suspect this should all make me very worried, but it doesn't at all because I watched a really old movie the other day and I said to my wife that I bet all these young vivacious people in the movie are now dead and she agreed... Or maybe I'm not very worried because I just am not very worried... but I think maybe I need a time chart, or a spreadsheet, or some other way of organizing all this information. Or maybe this could be a new college aptitude test, with a list of questions at the end. And I suspect this is just the beginning of a saga that might do more damage to my brain than the rest of me just to keep the players straight.