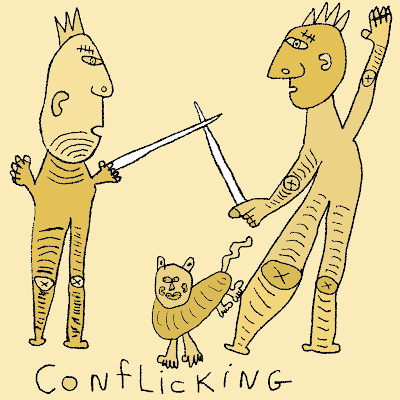 I decided to end suffering today. I thought I'd start out with about 24 people in a class I was teaching at the zen center. So I asked them if they had any conflict in their lives. They all said yes. Then I told them to close their eyes and to look at the conflict without blame, guilt, or judgment. I was convinced that no conflict could exist without the fuel from at least one of these.

It reminded me of a magic show in the park on July 4th. The young magician said, "is this your card?" and the volunteer from the audience said, "no."

So then we did a 15 minute mediation. I started thinking about the usefulness of conflicts, how conflicts keep us from getting close, and how fear ties us to our conflicts. It became clear that without conflicts we'd have intimacy... and we all know that we don't want that.

Next I went to a dharma talk about the Eight Fold Path, which starts with suffering and ends with a means to cease suffering. What was not talked about was our need to suffer. Without suffering we'd be facing ourselves and others without any clothes. Stark naked.

I've also been thinking about the koan about stepping off a hundred foot pole. Maybe to give up conflicts and suffering is that stepping off. How economical it is to live a protected existence on top of that pole!
at July 09, 2011