Discovering Emptiness in a Spinning Top 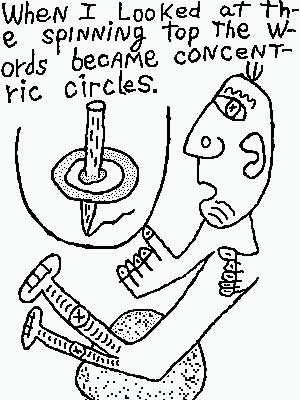 The Wednesday night reading group has been reading Nagarjuna's "The Fundamental Wisdom of the Middle Way" for a while now. We are just getting into the best part. And it is no more difficult than figuring out a child's top that you spin with your forefinger and thumb. Here's why:

Last night we talked about how emptiness is not the same as believing in nothing (nihilism). And that emptiness means "no abiding self," or in the case of a child's top (which wasn't mentioned), no essence.

Barbara was quick to say that hearing these ideas and practicing with them are very different. So today I went to the Blanton Art Museum and the Ramsen center to practice (shirking my volunteer duties to AZC).

First I ate in the Blanton's new cafeteria. I don't like to see art with my stomach growling. Then to the museum store where I found a child's top. It had words printed on a flat round disk. I spun it and voila, the words turned into concentric circles. That proved it, I though. In one spin I saw how foolish both Nagarjuna and Barbara were. It was obvious that the essence was the top standing still (with words), and when moving, is just appeared different (with concentric circles). I was satisfied that my mission was accomplished, and left the store (I though it was too expensive to buy the top that had disproved emptiness at $3.26).

Walking out to the street, I started thinking about a hypothetical top that is attached to an electric motor. The normal state (essence) of that top would be the concentric circles, and seeing the words would be just an abnormal view of the top. But suppose that one day the motor dies and the top comes to a stop. Then has its essence changed (a contradiction for if essence changes then it is not essence)? Then my mind went to the earth, which spins and rotates as if there was no tomorrow. What is the essence of that (a spherical object in motion?). I started to doubt the validity of my "there is an essence" argument.

A minute later, as I went outside, I saw an old truck with scratches, dents and faded paint. So what was this truck's essence, it if had one? Was it the way it was yesterday, the way it is now, or the way it will be tomorrow? Suddenly essence disappeared and Nagarjuna (and Barbara) made more sense.

Please come and help us sort out the thinking of this 2nd century Buddhist saint. Find out why he is thought of by some to be the next (2nd or 8th?) Buddha.
at May 14, 2009

Doubt is the portal to wisdom. H.