Woke up at 5 am believing that two sequential ringing cell phone calls were my alarm clock. One would have been enough. But two indicated the state I was in. The phone calls would have told us that our son and daughter-in-law were on their way to the hospital to drop off (3 pushes) their new baby (just named Dashiell Grey Zwerling Mosley). Rushing out the door to the Zen center, I told my wife I'd be home at 9. A few blocks from home I realized that I'd be there longer than that, so I called and left her a message to call me if she wanted to leave that day.

It turned out that our kids wanted us right away, so my wife arranged for us to leave that morning, expecting me home at 9... and not listening to her phone messages. When I called her at 11, she was angry, even when I told her what the priest had said in his dharma talk about Norman Fisher who spoke about not judging because you can't ever know the whole story. I went home, made reservations for a 1:15 plane flight, and we arrived in Philadelphia via Houston and Nashville that evening. 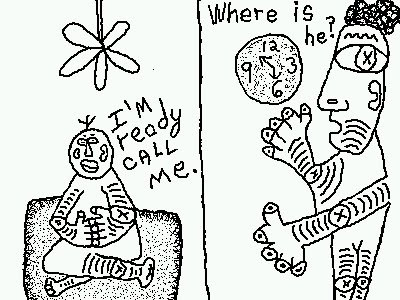 I'm ready call me
Where is he?

In the movie the Matrix there was no spoon! It seems for you it would be better if there were no bells . . .

so much for cell phones...Congratulations!(esp. to your daughter-in-law for 3 pushes)

I liked the words, definitely contributes to communication. Sorry it took me so ling to get to this one. I t would have answered much. H.