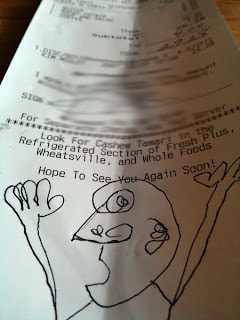 So I corrected my cousin who said that it was a cost to a religious person when they fast (i.e. they would be "losing" the opportunity for food, and thus happiness.) I told him that it is a privilege and benefit to fast, because it gets one closer to their path.


Later I asked the Zen priest what he thought and he disagreed with both of us. He said in Zen we try to do things for neither gain or profit.

At lunch with my daughter and wife, I asked my daughter what she thought about my theory that if it gives happiness to do things without gain, then that's a gain. She said, "let me tell you what I've been thinking about." And she went on about something that sounded very interesting, but she'll have to write down what it was all about. One thing I do remember is that (in the book she was reading) people of privilege tend to think more in "bad and good," "right and wrong," etc., while people on the fringes tend to see the whole picture (outsiders?). All for $29.28 at Mothers (I got to pay).

Good for your daughter! yes, my psychologist agnostic/atheist best friend Shirley, did research on altruism & empathy (and is probably the most empathic & altruistic person I know). Rather than true "altruism", her research "found" & she believes we "do good" because it makes us feel good. She also believes that our actions are determined by all the factors of our birth & experience, so we're all doing the best we can. Hmm.