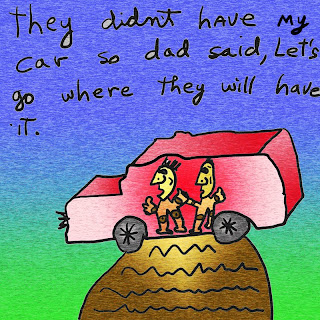 About 40 years ago I had my first teaching job and decided that I could afford a new car (as opposed to one that had 100000+ miles and was falling apart). We were going to be moving to Texas the following year and we thought we'd need something dependable. First I decided on an used Suburban, but it was owned jointly by the Grissley Cheese Company and the Southside Worm Ranch (my son's family has a print I made about this fiasco), and their banker finally told me that they couldn't sell it. Then it was a Checker (as in cab) station wagon, but I was unsure if I could get it serviced in Dallas. Then an International Harvestor used Travelall... but it was expensive for a used car. Finally decided on a fleet version of a full-sized Chevy wagon. Gas was 29 to 39 cents a gallon and no one thought it would ever go higher.

Even though we lived in Peoria, it seemed the place to get a fleet model was in Chicago... so I called a dealer and arranged to pick up the car on a certain date. I called them a few times after that to confirm that they had the car. They reassured me that it was there waiting for me.

At that time my parents lived in Chicago. My dad and I went to get the car. I don't remember if we drove, or took public transportation. We probably drove, though my parents didn't own a car for many years in Chicago.

We arrived at the dealer, which looked more like a parking garage. I'm not sure that it had a showroom at all. I identified myself and asked to see the car. Oh, they said, we don't have that car. I was all ready to explode when my very calm and practical father said, let's go to another place and find your car. (What a teachable moment for a father.)

Somehow, we managed to go to another dealer and found the right car at the right price.
at June 04, 2010

A Kim explosion would be an event worth seeing and evaluating. The Buddha would be shocked! H.