To Hell in a Hand-basket 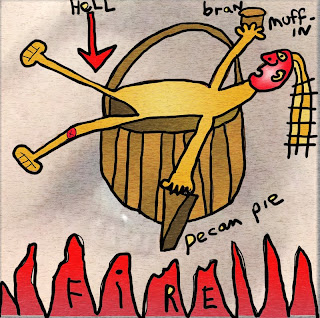 The doc gave me some wicked little yellow cough pills. They work on the cough center of the brain along with the lungs. It said not to bite into the pill or it would numb your mouth and then you'd choke to death. As usual I read the instructions after I took the pill... but (luckily) I didn't bite into the little bugger so I'm alive... I think.

I signed up for an online course, and the instructor asked if I was living in Austin, Texas. Since most of the day I was just coughing, the word "living" took on a special meaning. I emailed back that I was in Austin, and that I was living... not mentioning that a few hours earlier I was more dying than living.

(I did a collaboration  years ago with my friend Mary about living and dying. I thought she was dying and she thought she was living... and we didn't realize the disconnect until the end. And now, eighteen years later, she's still living.)

I tried to write something, but then I'd have to cough, and then I'd have to cough again... and my mind couldn't do much more. So I met my wife at the "Upper Crust" for dinner, but I had just eaten dinner... so I planned to just have water with a big chunk of lemon. I then figured if I sinned a little it might feel better than coughing, so I bought a bran muffin. Just a little sin in my book (I try to eat no wheat & no eggs).

In the middle of our "dinner" my son called... and he's usually lucky to find a few minutes to call... so we talked. Finally I said I was on a hot date with his mom... so I got off the phone. I realized that it was a little warm in the restaurant/bakery. A bakery at 5:30 pm isn't otherwise a hot date because it is empty and ready to shut down when their last customers leave (us). Hot date stuck in my mind, so I decided, esp. since I was dying, that sin was called for, so I saw some large cinnamon rolls on a tray for sale. I pointed to them and told my wife I was now really going to sin. She said, "why don't you get a piece of pecan pie?" I went to look at that and said to the clerk I'd like a piece and pointed (extra words were hard to come by without coughing). It was a $1.10. I asked if there was a special price for a birthday boy? He took one of the two dollars in my hand and put it in the tip kiddy jar. The pie is free for your birthday, he said (that's why we love Austin!).

My wife asked how it was, and I said, "terrible" (eliminating any need to share). That must have been sin #6 or 7. It actually was so satisfying to taste something so sweet. It took my mind off my cough, and it is much more fun "to go to hell in a hand-basket," as my mother liked to say, than to cough.

I finally made it home (despite the warning that those taking the cough pill shouldn't drive) and fell asleep (dying) to wake (living) and felt a whole lot better...  even feeling the good taste of that sinning pecan pie from Upper Crust that took me to hell and back, in a hand-basket.
at June 07, 2010