No and Yes, Birthing and Deathing...and Now 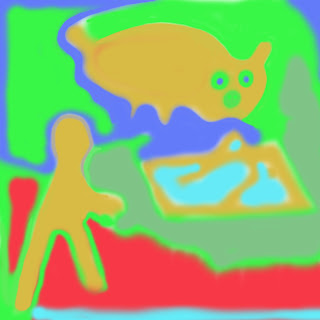 A letter to my 4 year-old grandson:

The other day I refused to read the book that told me about the rest of my life. Good thing, too, since the book does not exist. I like the fact that each day brings us something new.

This morning I received your video, where you so beautifully discuss the meaning of yes and no. That is such a quandary in Chinese, since they don't have words for yes or no. If you ask, "is the soup ready?" they simply answer, "it is ready" or "it is." So you see, we can function without those words "yes" and "no" that we use so often. It is a lot faster to say "yes" in answer to "are you ready for dessert" than to say "I am ready for dessert." But the Chinese were not in a hurry. At least, that is what we were told. Now they are in a hurry, rushing around like there is no tomorrow (that's an expression that you can figure out yourself).

I wrote back that death being an idea would be an interesting defense in a murder trial. Suppose one of the mouse traps went off that we set in your house and "caught" the mouse. And suppose it was against the law to end of lives of mice, as it is to end the lives of dogs. So then whoever set the trap would be arrested and they would stand trial for ending the life of a mouse. And the lawyer for the accused (I think I set the trap, so I'd have to come back to Philadelphia to stand trial as the accused)... the lawyer for the accused would argue that I can't be accused of breaking a crime because ending the life of a mouse is just an idea, and we don't have laws, at least criminal laws, about ideas. I'm sure you follow this, and if you don't, that's ok too.

So I took a nap (because your grandma told me I needed to do that if I wanted to go out...which I do) and when I woke up I thought about there being nothing in between birth and death. So if you think about it then I think you'll see that it makes sense. Since you are growing you are being born. It is a gradual process. When you started your life you were smaller than the head of a pin. When you were about as heavy as brick, you came out into the world from your mom. Now you are as heavy as 5 or 6 bricks. Your dad is as heavy as almost 25 bricks. At some point, we stop growing and we start dying. Nothing to worry about though, because, like "birthing," that takes a very long time. Except for the mouse who is hungry for peanut butter.

But don't worry about the mice in your house, because any good Philadelphia mouse prefers peanut butter with sugar to your better-for-you Trader Joe's peanut butter. So the mouse, you, me, and everyone else who are around are still birthing to deathing. And so birth and death are really one, and they really are just ideas in our minds, and now... what is now? Maybe that's for another letter. OK?

P.S. I sent this to my teacher. He replied, "Kim Oy! The rest of the idea reads thus: There is no absolute birth and no absolute death, and what is born is born and what dies dies. Smiles,..."
at June 10, 2010