The Rat and Sudden Enlightenment 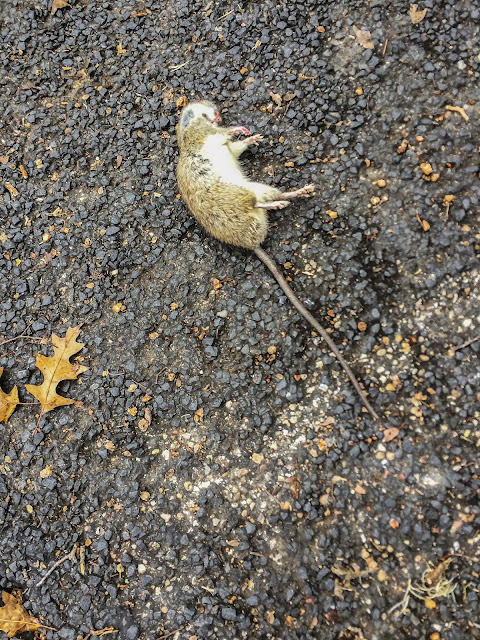 Have you heard the saying, “Make a plan and watch god laugh?"

Every day I was going to do accomplish five things.

Today I had the whole day, which means I'll waste more time. Someone in the neighborhood said he'd loan me a cable for a network experiment that I was doing. I hadn't been to his house, so I drove to his street and got out of my car and walked across the street to see the house numbers.

I've been trying to be mindful of my actions. Here was such a simple task. Walk across the street. Find the house and get the cable from the porch.

And then the rat. It is always a rat that goofs up plans. The rat just wasn't supposed to be there. He wasn't part of the world I had constructed.

Last night I was reading about the debate between sudden and gradual enlightnment. This was certainly sudden enlightenment. But what did I learn?

This is not my world. It belongs to all of us, and what happens is the result of many paths crossing. There is not one story, but rather, all these stories intersect. The rat had a story, perhaps that it had been poisoned. I had a story—my computer network wasn't behaving well. And you had a story, doing what you do. But these aren't independent stories. They intersect, sometimes with a thump. Kicking a rat is a unique experience. For a moment, my foot felt this rather plump fellow.

My day continued, with time flying out the window and I still hadn't done my five things. Then a friend called and I knew he'd be out of touch for the next three months so we talked for over an hour.

Still a couple of hours left to do my five things. And then my son called. He was very excited to talk about his new project, so we talked a long time. And the clock ticked and the rat lay in the street, and the intersections were all there teaching me how interconnected we all are.

Have you heard the statement, “Make a plan and watch God laugh.”