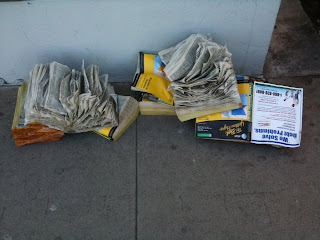 One of my neighbors, describing himself as a conservative Republican, says that our government is criminal because they spent so much money. I'm not in favor of big gov., or of a spending gov., but I refuse to point the finger. I wrote him:

Responsibility is a funny thing. Imagine that all of us have unlimited power... and that we use only a small portion of it. Anything that happens is, in a sense, our responsibility because we could have done more. We could have persuaded people to put on the breaks, to vote for different candidates, etc. Pointing the finger sometimes need to be done in the mirror. Do you know what I mean?

Another neighbor was shocked by my assertion that most people could get along fine without reading, and that most of their information comes via video. I believe that reading is a skill that was developed because we didn't have video, and now that we do, we don't need it. That is, most of us. Students can now make it through k-16 without reading a book. See this article: What is the Worth of Words?

This is not an argument about what I'd like to be true, but rather one that I observe to be true. We spend countless education hours trying to convince kids to learn to read. They don't practice because they get so much more on television. Why not teach them instead to become critical watchers? Wouldn't our time be better spent?

The same is true with algebra. A waste of time for most. And trying to learn algebra keeps so many from graduating college. Who uses algebra? Hardly anyone. Do I love algebra? Yes, but so what. Why not teach kids how to interpret statistics? Or to learn how much they spend when they don't pay their credit card off every month.

Have I stepped on enough sacred cows for today?
at December 31, 2010

C'mon Master Kim, If I couldn't read, how would I know what you were trying to teach me? H.