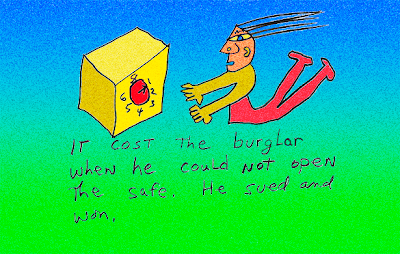 It cost the burglar when he could not open the safe. He sued and won.
Obama: "There’s nothing serious about a plan that claims to reduce the deficit by spending a trillion dollars on tax cuts for millionaires and billionaires." Amen.

That's what someone wrote on their FB page. Amen. I'm a little taken back with Obama's chutzpah in saying that Uncle Sam would be spending a trillion dollars on tax cuts if he'd reduce taxes. One spends money when they buy something. They don't "spend" when they stop taking what isn't theirs.

Would such a "reduction" reduce or enlarge the deficit? Even if we had an eight-ball, we still wouldn't know. So many other factors come into play that the effect of one action gets lost in the mix.

I like to remember that anyone who is earning a billion dollars is not only supporting many many lives, but may be plenty of taxes (depending on whether the earnings are from income or dividends... and what loopholes are employed). At 25%, it would be $250,000,000. That is much more than that person benefits in terms of goods and services provided by Uncle Sam. Is it their fair share? Because they can afford more, should we take it? And is that the gauge—what someone can afford?

Majorities have a scary amount of power in a democracy.
at April 14, 2011

No billionaire pays 25 % in taxes, or even millionaire. Life becomes tax deductible as income increases. The more money I made, the less taxes I paid.
Tax policy has always favored the rich - time to close the tax loopholes and show some concern for the citizens of the USA that have needs.

You are right. Tax is on earned income, and there are plenty of opportunities for deductions. Raising the rate won't make much of a dent. An overhaul is needed, including the ability to enter your data online to file.