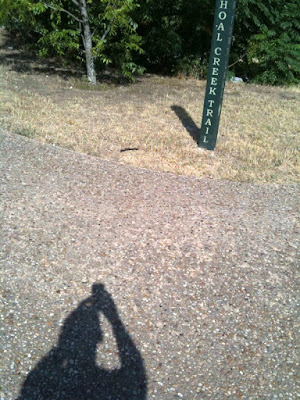 So I decided today, instead of going to a $15 hatha yoga class, to walk for one hour, which expends the same number of calories. And further more, in my true obscessive compulsive behavior, I would take one picture (iphone) depicting the "decisive moment" of my walk (I actually made two exposures...I can not tell a lie). Oh yes I can... tell a lie, that is.

Anyway, I found this great trail blocks from my house that goes along a creek. A major discovery.

Also saw a squished dead frog on the street... but the decisive moment had passed so I could not take a picture.

In 1952, Cartier-Bresson published his book Images à la sauvette, whose English edition was titled The Decisive Moment. It included a portfolio of 126 of his photos from the East and the West. The book's cover was drawn by Henri Matisse. For his 4,500-word philosophical preface, Cartier-Bresson took his keynote text from the 17th century Cardinal de Retz: "Il n'y a rien dans ce monde qui n'ait un moment decisif" ("There is nothing in this world that does not have a decisive moment"). Cartier-Bresson applied this to his photographic style. He said: " "Photographier: c'est dans un même instant et en une fraction de seconde reconnaître un fait et l'organisation rigoureuse de formes perçues visuellement qui expriment et signifient ce fait."[citation needed]

Here's a translation from WebMonkey: Photography: it is in the same moment and in a split second to recognize a fact and the rigorous organization of visually perceived forms that express and signify this fact.
at July 26, 2009

One man's decisive moment is another's, let's ignore this. H.