The Knot is Tied 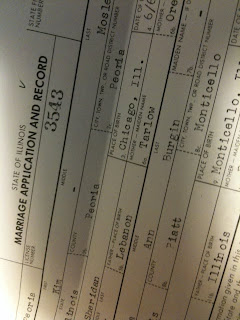 The certificate came today, with a seal and signatures. We are now legal. Yea. My son called and asked what this is all about. I explained that we didn't know if we were really married. This was pre-computer. Yet they had the original. Yea for Peoria. I said that without proof marriage is just in your head. He asked, "what about with proof." I said it was still just in your head.

I was thinking of the butterfly effect when I was sitting zazen today. Without much thought, or at least thought that I don't remember, we went in 1969 to the Peoria Justice of the Peace to get a marriage license. Between that time and today we created and altered lives, some negatively and some positively. And this rather random act of getting "hitched" caused countless changes in the universe. I was contemplating some of those changes today.
at January 27, 2011