My friend wrote that China becoming more innovative than America is a problem worth worrying about. I disagreed (I've pretty much disagreed with all his worries for about 40 years).

Imagine if Texas was more innovative that California... would we worry about that? We should celebrate innovation wherever it occurs, and find what we can do that no one else does (worry?) Besides, the competition is always healthy. When Russia was so far ahead in science didn't that spur us on.

Look how Paris was the center of the art world not so many years ago, until New York and California showed up on the map. Let's hope innovation is alive and well, where ever it is. Worrying is pathological.

"The leaders of Cisco, GE, and Xerox are worried that the US is losing
its competitive edge, and that it's high time to stop grandstanding and
do something about it.

"I'm optimistic, but I think that's partly because that's in my DNA, but
I think we're at an inflection point, unfortunately," warned Cisco
chairman and CEO John Chambers, who shared a panel with the similarly
titled Ursula Burns of Xerox and Jeffrey Immelt of GE at the Consumer
Electronics Show in Las Vegas.

That inflection point, in Chambers' view, refers to whether the US will
go forward or slip back, because the country is not only being
challenged by other economies, but also because in its education and
immigration policies, it's shooting itself in the foot.

"I would not give us such a good grade as I'd like to see in terms of
being an innovator five to ten years out," said Chambers. "We're still
leading, but our leadership is shrinking."

Immelt agreed. "As a country, the rest of the world is moving faster
than we are," he said. "The world's not standing still; China's not
standing still."
at January 11, 2011

As a country, the rest of the world is moving faster than we are --- article

I wish you slow down. Somebody’s gonna crash. --- Wyclef Jean

I one time had this dream. Everyone was running this race. I was way in the lead. Just beating everyone. But I didn’t want to keep running this race forever. I wanted to ride my bike to the river. So I stopped running this race and went to get my bike. People got really upset and freaked out. How could I give up my lead? How could I just let my competitive edge go so carelessly? I was fast. I was in the front. I was where everyone else should have been. But if running isn’t my thing, what the hell . . .

Sometimes I try to imagine a world (or even just an America) where people don’t strive for a ‘competitive edge’ and rather aim for a high ‘cooperation quotient’. What do you think that world would look like?

Is there really any progress? Have we learned to cooperate better? Love better? Suffer less?

I think I am cooperating better. At least from the standpoint that I no longer try to beat my brother for access to the green crayon. 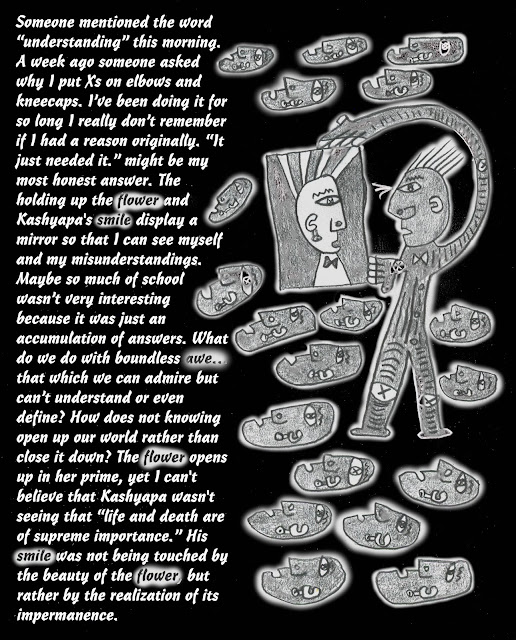