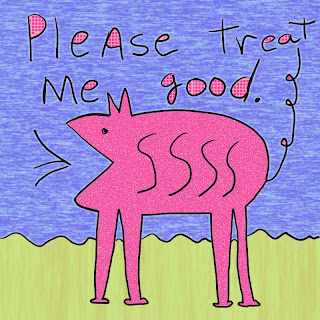 I told my wife I was going to watch Earthlings, the animal cruelty documentary. She said, fine, but don't tell me anything about it.

Bravely, I turned it on (with my door closed). I watched a minute or so... and then thought maybe I better try later. Now it is later, and I tried again. Trust me that the disconnect between the nicely packaged food in the supermarket and the way animals are treated is such that I can't imagine anyone eating the packaged food if they knew of the way animals are treated... at least as portrayed in the film.

I couldn't watch more than a couple more minutes. I packaged up the DVD and will put it in the mail box tomorrow. Enough is enough. My wife was right (as usual).
at March 19, 2010