Affirm Life: Do not kill 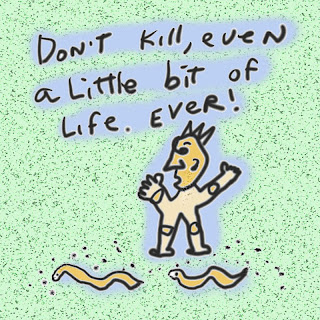 I was going to write about the ten grave precepts today... then five... and now I think one will do... especially as it is getting late.

Tonight we had the Bodhisattva Precepts Ceremony, which we do once a month close to the full moon. I liked especially our discussion before the ceremony about karma, confession, and repentance. Usually Buddhists don't use those words... and yet all of us have messed up at one time or another... and we need to learn (from Dogen, the monk who brought Zen from China to Japan) how to "practice" with that sticky karma.

The precept "Do not kill" is different that the Judeo/Christian commandment, "Thou shall not kill." The Buddhist precept is much broader. Some monks wouldn't go out on a path during certain seasons because they didn't want to step on an insect. But not because they'd go to hell, but rather because they care so much for life that they wanted to do everything they could to "affirm" it. And it is based on experience, not prescription. We see what happens when we kill, and we then avoid doing it. But what are we avoiding... that varies widely from person to person.

Every day I get an email "Daily Dharma." Today it was:


My sense is that there is a very real problem among Western Buddhist practitioners. We are attempting to practice meditation and to follow a spiritual path in a disembodied state, and our practice is therefore doomed to failure. The full benefits and fruition of meditation cannot be experienced or enjoyed when we are not grounded in our bodies. The phrase from the early text, when understood fully, implies not only that we are able to touch enlightenment with our bodies, but that we must do so--that in fact there is no other way to touch enlightenment except in and through our bodies.
-Reggie Ray, "Touching Enlightenment" (Spring 2006)

I thought that was terrific. As I sat tonight, I tried to see that it was my body sitting. I (whoever that might be) had put my body on the cushion. Suddenly my mind and its ramblings were not important.

My body is on the cushion, not killing, not harming, not doing evil. It is not trying to be "good" because of the fear of any consquences. It is simply that this is how it wants to be.
at March 31, 2010