Putting the story aside 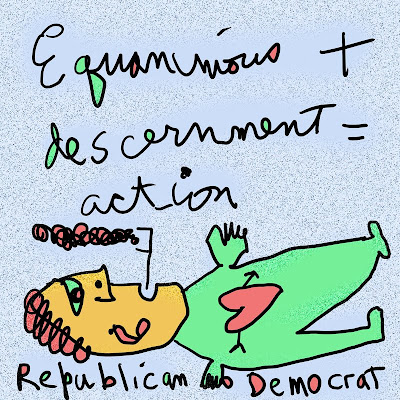 My aunt Reggie, a psychotherapist, asked me a similar question, "Putting your story aside, what is really going on?"

We get that when our friend is telling us what a miserable or beautiful day they had, don't we?

So now it is 15+ hours later. Spend the day sitting again... and thought much about Chris's post on Facebook about Gary Becker.

But first, the question (what is this?). I wasn't sitting too long when an answer appeared. "Nothing." After the stories goes, maybe there isn't anything left that is real (not that the stories are real either, but they try harder.)

Then I started to formulate all kinds of replies to Chris, who wrote that the health care bill was legislation as important as social security and medicare. I was in the "this is right and this is wrong" mentality.

I then started thinking about how I could be equanimous in regards to politics. Why not? Wasn't I falling into the same trap as Chris did, taking one side and not seeing that each side really have their points. Sure, social security has saved a lot of lives. And, sure, it probably hasn't given some a very big bang for their buck. The point is that we need to try to see it from all sides.

I had another dokusan with roshi (teacher)... and first told her "the answer" that nothing is left. Then we talked about how to be equanimous and still be able to act. We talked about Gandhi and the Dalai Lama, both very political. She mentioned a formula that seemed to make sense: equanimous + discernment=action. Then she said a few times, "what is it" and rang the bell, indicating our session was over.

She told me about an Indian tribe near Syracuse where she lives. When the elders have a discussion, they put a pumpkin on the table to remind them to see all sides of the situation and they all work to understand the problem from all perspectives... and eventually they come up with a solution. Compare that to our system of nay and aye-sayers!

I didn't know if she asked "what is it" again because it is one of those things that you have to keep asking oneself... or if she wanted me to keep asking the question because I need to work more on the answer. Or both. Maybe I'll find out next year when she returns.