How has Buddhism affected your art work? 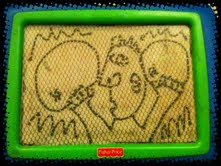 J. asked this a few days ago. I didn't think, at first, that it had affected my art. Then a list came:

1) I have less need and desire to be perfect. Suzuki's statement that "you are perfect just as you are" suggested that maybe my lines don't have to be manhandled forever. So I'm drawing quickly like the Chinese calligraphy that I've been admiring.

2) I used to give my figures penises, vaginas, breasts, etc. Now I don't feel the need to do that. The characters of the figures is more subdued. I have a friend who'll never forgive me for eliminating the appendages.

3) My drawings are less apt to be reflecting sizzling electrodes. I feel calmer my art seems more passive and less chaotic (at least in its construction).

4) The drawings are more apt to show mind states rather than action states. i.e. being rather than doing.

I'm not sure if any of this is obvious to anyone else, but it is to me.

On another subject, I brought two books to read on the plane: Radical Honesty and Zen Training. So first I read an old New Yorker, then the Southwest Air flight magazine, and then Radical Honesty, thinking I've had enough of Zen recently. Lo and behold, it is (so far) really about Zen. Even mentions meditation, enlightenment, conceiving of the unity of the universe, etc. So much for that plan.

I decided that I was going to reject the idea of Radical Honesty before reading it because it is impossible to tell the truth because we don't know it. So I asked my three and one-half year old grandson to tell me a lie and he said, "I'm friends with Beta." Since Beta doesn't exist, we all agreed it was a lie. Then I asked him to tell me the truth and he said, "I'm friends with Annie." So back to the drawing board on my rejection of the book on these grounds.
at April 21, 2010