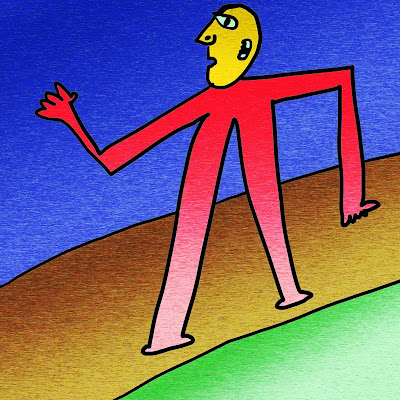 My cousin writes, "Although I've thought at times about studying meditation, I'm not sure it's the right path for me. I tried transcendental meditation in my twenties, but didn't find it fit me at that time. But I have wondered how and why it's become such an integral and important aspect of your life -- what it means to you, how you feel it's changed you."

Though the expression "Zen meditation" is used, meditation in zen is often referred to as "sitting" or even "just sitting." It is what we do when we aren't doing something else, but in a sense, we try to be present no matter what... so sitting is really all one can do.

I did try for awhile "dynamic meditation" which was done at a Thai Buddhist temple near our house. In it, your arms are moving in a complex pattern during the entire time, so unless you are Einstein, all you can focus on is having your arms do the right thing. I felt like I was building pathways in my brain that would live on to haunt me like when I spent a few very long days in college saying the same phrase over and over again trying to sell newspapers to cover my tuition ($350, not the current $52,000).

Sitting is not something one studies. What is studied when sitting is oneself. It is looking in the mirror, but rather than doing it with one sense, you are doing it with six senses (the mind is included as a sense). Though you focus on your breath, often other thoughts come and go. I feel when I sit down that I'm a stream and someone threw in a pebble. As I sit, I calm down. It seems to take less and less time to settle down as I sit more and more. I'm fortunate to have another "meter" to see how my sitting is going. My ears ring. When I am sitting (really sitting), they quiet down... sometimes so I can't hear any ringing even if I try.

Initially I was anxious for the time to be over...esp. since my legs would hurt, or my face would itch, or my back would hurt. Now I realize that when the hurts appear they will go away. And I thank them (the pains and itchings) for visiting and then say goodbye to them.  Tonight my nose itched. My first thought was that I should scratch it because it could be an alien trying to take over my consciousness. But I waited. And either it went away, or the alien did his thing and I am him/her. I used to get tired and fall asleep. Now I'm not so tired. Maybe I'm breathing more deeply.

I'm not sure that sitting is a path, but rather a tool like clothes that one wears when taking a journey. Rather than keeping you warm, sitting keeps you quiet so you can feel the ground.
at April 19, 2010

Thank you for this.

I always found this question odd simply because I didn’t know how to answer it truthfully. I couldn’t say that I ever experienced a peace or a calmness beyond what I was feeling when I first walked in the room. Usually my mind just argued with itself over shit that I had already been thinking about that day. Sometimes I remembered stuff I hadn’t thought of in a while and I would wonder why I had all the sudden thought of that. Sometimes I would sit there and wonder if it would bother anyone if I moved my leg because it had fallen asleep and it didn’t like its current condition. Sometimes my mind got board and I would sing show tunes or commercial jingles in my head to pass the time. Was it doing me any good? Well. . . I wasn’t smoking or using precious electricity at during the time I sat.

I actually liked the dynamic meditation. I wouldn’t say that I focused on the arm movement as it just became very second nature. I also wouldn’t say that the thoughts stopped or that I wasn’t singing the Oscar Meyer Baloney commercial in my head, but I did feel a difference in my body. A gradual relaxing of muscles and perhaps a change in blood pressure. It was something I could feel bodily. I’ll give it to you there is this sense of repetitiveness about it. But I actually think that’s why I preferred it over just sitting. But from the beginning, I recognized this was the same feeling I got when I crotched, which I also enjoy.

For a while, I was on this huge Robert. J. Lifton kick. He talks some about how Korean captures used isolation as a ‘brainwashing’ technique. Basically the longer a person sits without stimuli, the more open to suggestion they become. During this time, I watched some video about people who had volunteered for an isolation study. One of the participants was this guy who felt that his mediation practice would help him through this isolation period. He was just going to meditate through it. Well, he did a little better than the other participants meaning that it took him a bit longer to fall asleep or start hallucinating. I remember watching this video thinking that monks go into caves and isolate themselves for months as part of their practice to better their understanding of . . . Nirvana. The people in this study get locked up in isolation and go a bit crazy and have difficulty distinguishing between reality and mere suggestion afterward. It’s weird because on some level these are the same practice. What makes the difference?

One night after the dynamic meditation, the monk asked the ‘What did it do for you’ question and went around the room to get answers. I gave my usual answer that I didn’t know how to answer the question yet and that maybe I would be able to answer it later. But as he went around the room, the answers were all sort of similar. The meditation reduced my anger. It brings me a sense of peace. It helps me feel calm. Then the monk got to this little girl who was probably about 9 or so and she says, “I feel so peaceful. It just makes me so calm and I am happy. I really like this.” And everybody smiled at the girl and congratulated her and told her to keep up the effort. I remember thinking, “Only took that kid two sessions to figure out the script.”

But even this event isn’t the one that most bothers me about that school of dynamic meditation. The thing that bothered me the most was this video the monks showed us one night. It was about the individual who had created this meditation form and his retreat area in Thailand. There were lodes of people in the video talking about how this practice had enhanced their lives sooooo much. It was obnoxious. Can you blow your horn any more promotional video? But then I noticed that the rooms these people meditated in had locks on the outside of the door. These mediators were not locking themselves in to meditate. They were locked up to meditate. WTF? I honestly feel very uncomfortable practicing in a tradition that puts locks on the outside of the doors. I don’t think that is necessary. I think it is weird.

So anyway when one talks about meditation as a path or a tool, it’s really the same thing isn’t it? It can be the wrong path or it can be the wrong tool. Really all one is saying is that this particular way doesn’t seem to suit him/her at this time.

So is meditation good or not? I think it depends on many factors what kind of outcome the meditation practice will have. If you feel that it helps you relax by quieting the left hemisphere of your brain for a short period of time and allowing the right side to take some dominance, I’m not going to take issue with this. It might be true and there might be benefits to doing this. But that same practice can do some serious damage. The members of Aum Shinrikyo (who practiced a form meditation) still believe the teachings of their head monk are good despite the fact that they came from a man who organized the release of deadly gas in a busy subway systems.