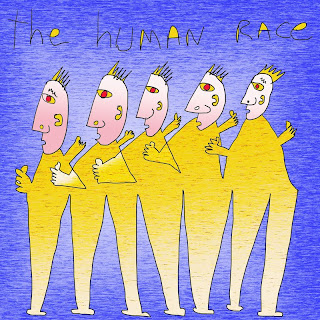 After engaging in an online discussion on race and ethnicity, and entertaining the possibility of evil on my blog, my friend tried to explain why she won't even talk about race. I begged her to write about it, but she declined and said "do it yourself." She does write continually, but only on topics of her choosing. And actually writing about how we construct distinctions between people is one of her topics.

First off, some say that the only race is the human race, given that chimpanzees living in a remote area of Africa are more varied genetically than all humans... and penguins come in 15-20 species.

My friend is completely uninterested in this argument, saying that anyone who has any brains knows that race is just around to substantiate (or not) superiorities of one race over another, and that in truth there are no races anyway.

But then she talked of how we construct various groupings (my word) of peoples with the intent of stereotyping groups as having specific characteristics. What was most interesting to me is that, like evil and suffering and many other concepts, groupings have very real consequences once they are constructed. They may be artificial, but as long as we act on our preconceptions the result will be real. For example, I believe men less than 5'10" cannot be trusted (a construction with probably no basis of truth). Then I act on this construction, being careful not to associate with any "shorties" (including myself). What had no validity now becomes very important, especially to the "shorties" and actually to all. Society is cheated from dealing with a fine and honorable group.

Therefore denying race, in my friend's opinion, gives people a false sense that they've solved a problem, where really the problem, though constructed, is still here and there and everywhere.

P.S. I sent this to my friend, hoping that I represented her correctly (it was a very very noisy restaurant for someone who doesn't hear well). She said that I did, and added, "I don't think that "race" is only around to substantiate superiorities, though. There's this great show on now called Treme, a show about New Orleans post-Katrina. It's about race...for example, cultural movements of Jazz and neighborhood solidarity, structural racism (bad levees, looting, prison mishaps), within-"race" conflicts between middle class and working class/poor black people, etc. But it complicates it all-layers these different racial issues, and shows the interpersonal, structural, and societal impacts of race and racism on New Orleans. I think that race is one of the fundamental ways our society is organized, historically, and most societal issues are intertwined with race in some way."
at April 29, 2010

I bought this cheap Volkswagen Rabbit back in the day. The tail lights didn’t work. I couldn’t figure out why. I did obvious stuff like replace the bulbs and the break switches. I drove around about 8 months without tail lights before the problem got solved. I know it was wrong, but I just had places to go. You know how it is.

I did get pulled over a number of times. Each and every time the police man would tell me my tail lights were out, I would put on the most puzzled expression I could muster and say, “What? Really? Both of them or just one? What do you think might cause that officer?” The police man would usually tell me to put on my hazards and drive home. They told me about how to replace the bulbs. And they all told me to be very careful. They were very nice people. I listened to their every word very intently and I thanked them for their advice and for letting me know about the problem. I’d put on my hazards and drive away. As soon as he was out of site, I’d turn off the hazards and think, “It’s good to be young, white, and female! Sucker!”

I actually did get a ticket once, on Christmas Eve. I realized quickly that my act wasn’t working and I even tried to tell the police woman that she should give me a brake because it was a holiday. She wasn’t buying any of my bullshit though. That $30 ticket bumped the tail light issue to the top of the priority list. Stupid Volkswagen.

Race is a game. We all play it.