K many years ago was doing a multi-projector slide show and it was messing up like nobodies business. She was absolutely calm as she fought with the technology. It was the first time I had met her and I was very impressed by how she handled a very imperfect technology.

A number of years ago the senior Zen teacher, Norman Fischer, was bent out of shape because we didn’t have his books on hand when he came to do a talk. I’ve talked about this many times because I often have that thought that seasoned Zen practitioners shouldn’t “leak”—they should in all situations maintain equanimity.

I read the story of the Dahlia Lama visiting a hospital where there were many with serious illnesses. He cried with each person, but when he left the hospital dropped his sadness and started laughing at a funny joke.

Last night my Zen teacher was bent out of shape because her Apple TV wanted a code that wasn’t appearing on the screen. I told her about K. She said there is no should about how a Zen priest should act.

I’m sure he had the best of intentions and was somewhat shocked that someone might not want help. I’m very conscious of this habit I and others have of giving too much help. I wanted to be challenged by the machine, and I didn’t want another human interaction.

I was aggravated by someone’s good intentions. What I rediscovered today was how I was the source of the aggravation. He just did what he was probably told to do. And I blamed him for aggravating me. That happens to me four or five times a day. Maybe I can get quicker at recognizing the aggravation and then dropping it, realizing that it was I who had created it, not the other person or situation.

Here’s a sweet verse we studied today. Dantika and the Elephant is a story about the first women of Buddhism. She is attempting to tame her mind like the elephant was tamed. 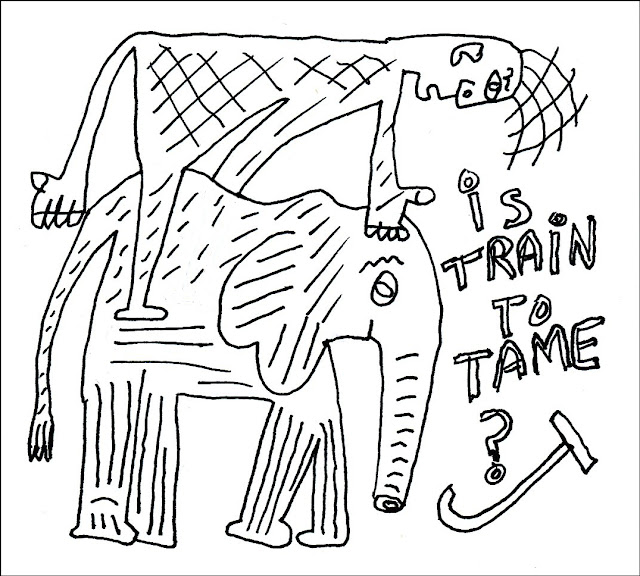 translated from the Pali by
Thanissaro Bhikkhu
© 1997

Coming out from my day's abiding
on Vulture Peak Mountain,
I saw on the bank of a river
an elephant
emerged from its plunge.
A man holding a hook requested:
“Give me your foot.”
The elephant
extended its foot.
The man
got up on the elephant.

Seeing what was untrained now tamed
brought under human control,
with that I centered my mind —
why I'd gone to the woods
in the first place.