A nurse, a philosopher and a Zen priest were aghast at my comments about Walmart. (Sorry, but this is sounding like a joke.) Yes, it is sad that the employees are treated as they are, and crazy that the CEOs earn so much. The challenge is what to do about these situations. Whose responsibility is it when someone doesn’t have basic necessities? Is it the responsibility of the government when someone is paid what seems to be an outrageous sum?

The bigger question for me is “being aghast” an appropriate response to an opinion that differs from their own?

Walmart and many other companies likely contribute to the destruction of the planet. They sell a lot of plastics. They also buy from companies that have terrible labor policies and conditions. And they also provide a needed service and employ a lot of people.

I probably own part of Walmart as part of an Index fund that I have. I proposed to a friend that we should boycott Walmart because they sell guns. He replied that those aren’t the guns the shooters are using. They are getting their guns from gun shows and over the Internet.

Some say that companies are owned by their stockholders and have a legal responsibility to make a profit. At the least, if companies aren’t doing this, they should let investors know what their goals are.

It is a kind of “shooting from the peanut gallery” to demonize certain businesses without considering the good that they do, and the problems they would have if they made profound changes (like not selling plastics). It is easy to say, it is unfair for two people to teach the same course, and one gets 1/4 of what the other gets. It is especially difficult when the part-time faculty member may do a better job than the full-time faculty member. But what is a school to do to fix these apparent inequities? 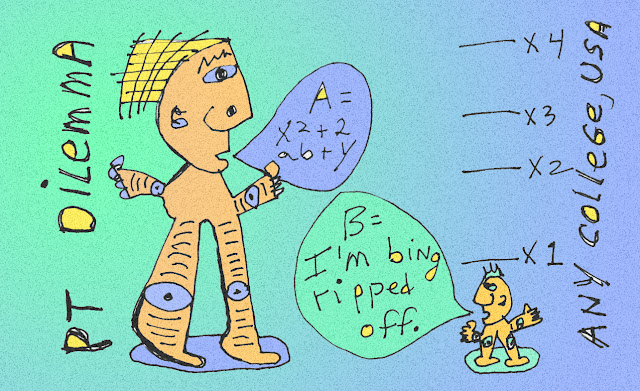 Antioch and similar schools, built on the highest principles, are having great financial difficulties. It isn’t easy to keep afloat. Luckily, as consumers, we can vote with our pocketbook in various ways. Eventually, companies will listen as we affect their bottom line.