He arrived early and waited for his shadow to c…

I wrote this earlier at the temple. I arrived way early because I got mixed up about the time. And then Bill, age 91, walked in and we talked about population and other world crises.

I do usually come early. My goal is to be 15 minutes early. I like to “open up.” I like to have the best parking space. I guess I should take the worse parking place. Carl, my first Chan (Chinese Zen) teacher, asked us to think about where we parked. It was a dilemma. Where does a thoughtful person park? I might give the wrong impression to someone arriving late if I left the best space for them. They might think it is ok to be late.

I had the idea today in our discussion that we have to keep the ball rolling. That is our job in life. In some way, we have to keep the ball rolling. Why? Well, in the same way, we could hope that other people will vote for the best candidate, we can’t always trust that they will vote. I’ve been in situations, even in the last year, where no one showed up to a group I was leading, or where I was the only person who showed up when someone else was leading. We can’t wait around for someone else to keep the ball rolling. In Hong Kong, everyone, it seems, is participating. What is China going to do? If they back down they give Hong Kong its independence. If the don’t, they will destroy a wonderful city. The people realize the value of their independence and freedom.

Tonight we are writing about gratitude. Not the kind where you thank Miss God that you got a bicycle for Christmas, but rather another kind. It’s the “thanks for nothing” gratitude. Not when you are sarcastic, but when you aren’t. Earlier today, at the same time that the police were hitting the protesters with their batons, I was quietly sitting in the temple with about ten others. I was feeling a tremendous dissonance between my life at that moment and the life of those protestors in Hong Kong, being up against the police, fighting for the freedom of their city. How could life be so different from one place to another on this small planet? I wondered.

We listened to Steve Stucky (http://sfzc.org/gratitude), having recently been diagnosed with Stage 4 Pancreatic cancer, talk about his gratitude. He would wake up and sit on the edge of his bed and say the word gratitude. He wrote on his blog, “The ‘practice of gratitude’ for me begins simply with saying the word ‘gratitude’ and allowing whatever arises in thought to be regarded as lovable no matter who or what it may be. This immediately cuts off the mind of personal preference and acknowledges that everything, absolutely everything is fully participating in the fact of my existence this moment. The challenge of this practice often slaps me in the face and sets off a series of seemingly impossible barriers.”

It just flashed through my head what conversation we might have with Miss God when we go to Heaven (if we are so lucky). If we had a long happy life we might thank her, assuming we believe she choreographs such things. But suppose we were unjustly put in prison for life. Supposed we were tortured all our life. Then would we complain and ask for a refund.

Seems the gratitude that Steve is talking about is not thanking anyone for the gifts that he had received in his life, but rather for life itself, in all its many facets. It reminds me of when Jim talked about how he was thankful that he could be sick.

I wrote about suicide yesterday. How bad do things have to get so there is no hope for a better future, where all that can be imagined is dismal? When doing yourself in might be the only out?

I have had a life of privilege and good fortune. For the most part, we are well and have all we need. Not too many people can say that. We have lots of love in our family and never a dull moment. So I feel a bit dishonest saying, “thanks for nothing” because I’ve been given so much. I get a check every month from the State of Missouri that is such a gift. It allows me to do whatever I want.

So I want to have gratitude for nothing. What gets in the way is that my life is so plentiful. If I was in Steve Stucky’s shoes in 2013, I would still have my memories of so many blessings, so I would see those memories as my object of gratitude.

I took an IFS (Internal Family Systems) workshop with him about a year before he died. He was standing right where I am sitting now. That’s weird. It was kind of like being in Rome and standing right where Michelangelo stood. How I wish I had had that experience when I studied Art History. 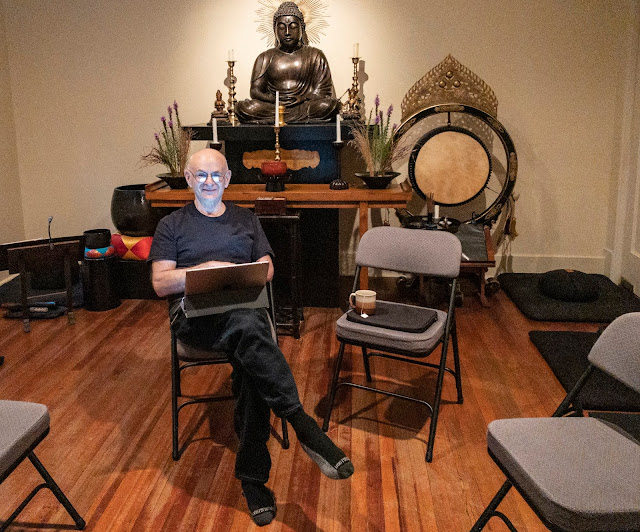 So I thought writing this would be easier. I thought I could appreciate the moon-faced Buddha just as I could the sun-faced Buddha. Now I realize it is not so easy, especially for someone whose life has been so filled with sun-faced Buddhas. See http://suzukiroshi.sfzc.org/archives/index.cgi/710817V.html?seemore=y if you want to know more about these Buddhas who accept “life as it is,” as Suzuki Roshi would say.
at August 13, 2019