Not Knowing is Most Intimate

So I’ll have an idea and I’ll tell my wife and my friends and they will tell me I’m wrong and then maybe I’ll write about it and more people will tell me that I’m wrong. I love to be wrong, which is good because I’m often wrong. Way wrong.

So I had this idea that God is actually an emotion. We could call her awe. It is an appreciation of that beyond our imagination and comprehension. If we made a vend diagram circle of the things that we know, it would be a little circle so small that it would only be a dot. And outside of that would be the things that we don’t know. Years ago I heard that the things that we know doubles every six months. You’d think we’d know a lot by know, at that geometric rate of progression. But we learned in grade school that X times 0=0, which means that what we know is still just a dot. Zilch.

Across the street, someone built a beautiful house. It took a year, if not more. It is decorated. Some company comes and cuts the grass. But nobody lives there. I don’t know the story.

I heard today about someone’s son who has cancer and he is in remission. We don’t know if his cancer will come back.

What is meant by the koan that ends with, “not knowing is most intimate”? In the Western mind, knowledge is power. We strive to know, and when we don’t know, we investigate further. We assume that our lack of knowledge is the result that we didn’t try hard enough. Or that we didn’t have a powerful enough telescope or microscope or whatever. Students are tested on what they know, not on what they don’t know. Imagine this as a history test, “What do you not know about the Civil War?” That’s what killed the cat (curiosity)!

S wrote that she’s glad that she’s had no experience of God. I’ve always been curious about people who have that experience. And exceedingly jealous. I was glad to hear that Mother Theresa only connected to God for one week of her life. And she’s now a saint, isn’t she?

N questions my theory that believing in God is really an emotion, like love or joy. Some people never have that emotion. I was fortunate to visit a church in North St. Louis, where the congregation were speaking in tongues and falling backward into each other’s arms. Their God was an emotion that ransacked their bodies. This was not a discursive belief that they adopted. It was something that invaded their body like shrapnel from outer space.

If I told them it was just in their imaginations, they’d laugh at me. You’d only have to be there to see that something else was going on. A temporary psychosis. That’s how some might describe it. Mass hysteria? I don’t know. But it was as real as the moon in the sky, which could be some kind of hologram. Do we really know? 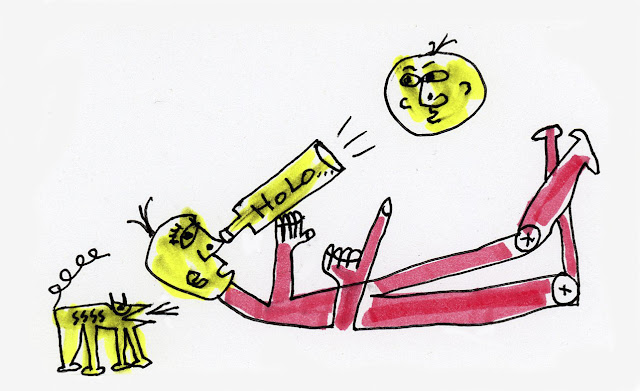 I like Elon Musk’s theory that our chances of us not being simulations from some advanced civilization are only 1 out of 1000. Even more surprising is that he is not phased by the idea of being a simulation. He embraces the idea. More than that, he embraces not knowing if he actually exists. And yet he lives his life to explore new technologies and new worlds.
at August 20, 2019