Right Speech and Shrunking into the Floor

One of the paths to ending suffering in Buddhism is right thought.

But first, here’s a description of the first noble truth of Buddhism that doesn’t use the word suffering:

The first noble truth says simply that it’s part of being human to feel discomfort. We don’t even have to call it suffering anymore; we don’t even have to call it discomfort. It’s simply coming to know the fieriness of fire, the wildness of wind, the turbulence of water, the upheaval of earth, as well as the warmth of fire, the coolness and smoothness of water, the gentleness of the breezes, and the goodness, solidness, and dependability of the earth. Nothing in its essence is one way or the other. —Pema Chödrön, Awakening Living-Kindness

Suzuki Roshi, who is perhaps most responsible for bringing Zen to America, spoke about “life as it is.” That’s what causes suffering, especially when we want it to be otherwise than how it is.

I’ve had some wrong thoughts or lack of thoughts recently that, if I weren’t to acknowledge, nobody would know about. Yet I believe we transmit, even as we walk down the street, much more than we’d like to admit.

At our neighborhood grocery, we need to weigh the produce and put a label on it. The customer at the scale I wanted to use was an elderly lady who was taking way too much time weighing a couple of bananas. Didn’t she realize how much I had to get done today? It was almost that she was moving in a state of suspended animation, whatever that means. I was impatient, though I was pretending to be patient. Finally, we had put the label on the two bananas and turned around, only to greet me and ask me how I was. I guess she recognized me from somewhere. I shrunk into the floor. 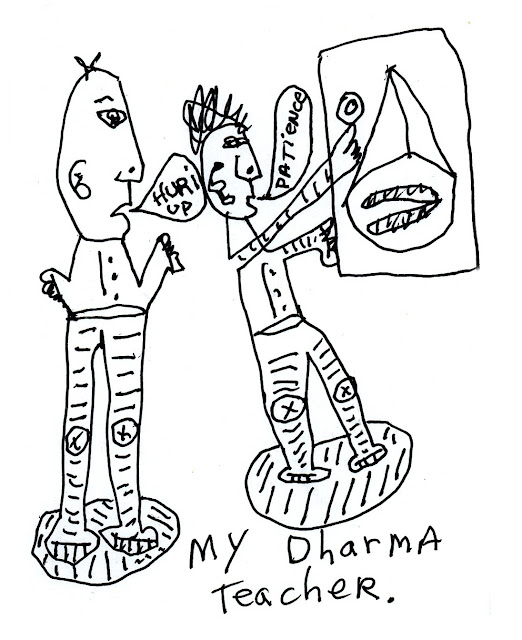 Years ago I was impatient with a student who just couldn’t get it right. I wanted to strangle her, but I controlled myself. The next class she thanked me for being so patient with her. I shrunk into the floor.

Worse yet, Sunday I was upset with a woman who stored her special chair in the closet where we put some trays that we frequently used at the temple. It was hard to get the tray in and out… and now there were two of her chairs. Who needs two chairs? I asked myself. A couple of days later we discovered that she had passed into another world. Tonight we gather to celebrate her life, and I will bring the two chairs so more people can sit. I, once again, shrunk into the floor.

It probably is easier to control actions than it is to control thought. Yet thought is far more poisonous. I can’t tell you how I’ve often  I’ve suffered from my thoughts in the three situations above and in many other situations that have permeated my life. A man honked at me when I was slow to go through a traffic turnaround. I honked at a friendly woman who was slow to weigh her bananas. How might I have appropriated responded to her?
at August 30, 2019